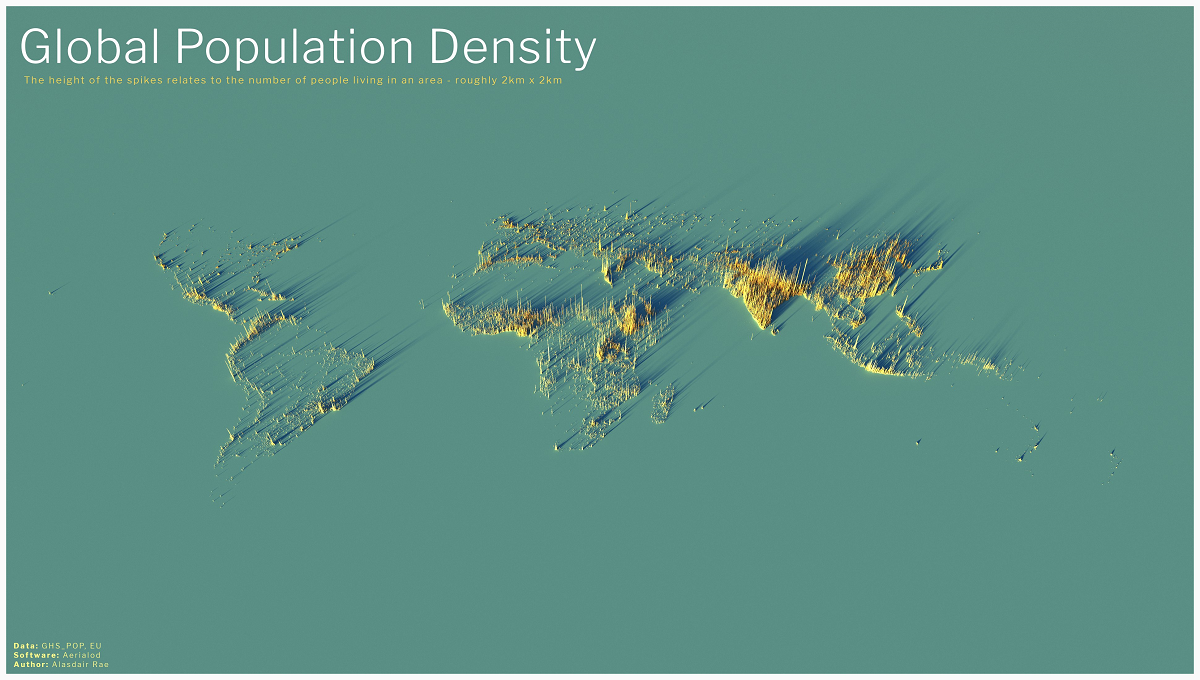 Click here to view the full version of this graphic

A 3D Look at the Largest Population Density Centers

It can be difficult to comprehend the true sizes of megacities, or the global spread of 8 billion people, but this series of population density maps makes the picture abundantly clear.

Though they appear topographical and even resemble urban areas, the maps visualize population density in squares. The height of each bar represents the number of people living in that specific square, with the global map displaying 2km x 2km squares and subsequent maps displaying 1km x 1km squares.

Each region and country tells its own demographic story, but the largest population clusters are especially illuminating.

China vs U.S. — Clusters vs Sprawl 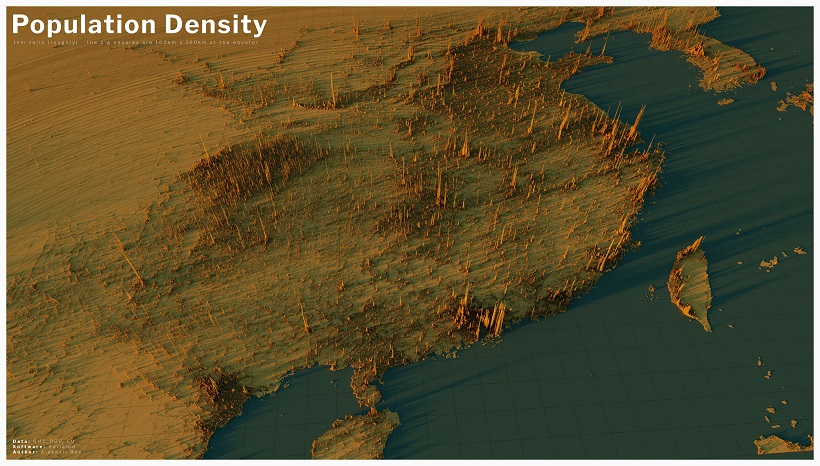 Zooming into the most populated country in the world, China and its surrounding neighbors demonstrate massive clusters of urbanization.

Most people are familiar with the large density centers around Hong Kong, Guangzhou, and Shanghai, but the concentration in central China is surprising. The cities of Chengdu and Chonqing, in the Sichuan Basin, are part of a massive population center.

Interestingly, more than 93% of China’s population lives in the Eastern half of the country. It’s a similar story in neighboring South Korea and Taiwan, where the population is clustered along the west coasts. 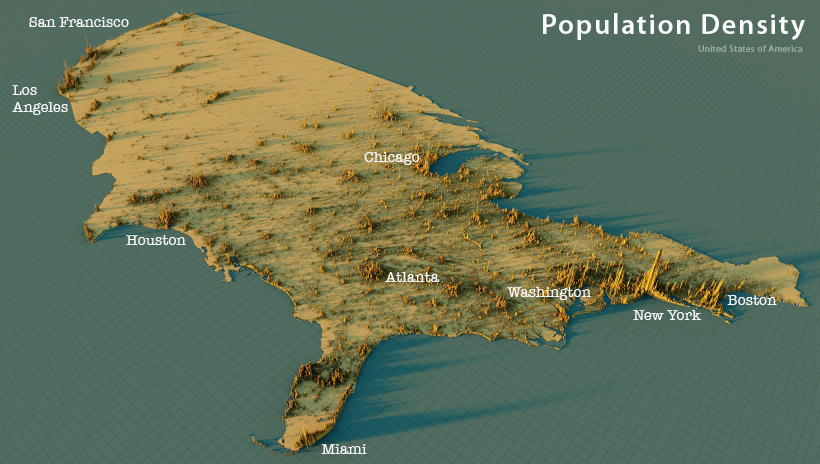 The U.S. also has large population clusters along the coasts, but far more sprawl compared to its Asian counterparts. Though the Boston-Washington corridor is home to over 50 million residents, major centers spread out the population across the South and the Midwest.

Clearly visible are clusters in Florida (and not exclusively focused around Miami like some might believe), Illinois, Georgia, and Texas. The population is sparse in the West as expected, but California’s Los Angeles and Bay Area metros make up for the discrepancy and are just behind New York City’s density spikes in height. 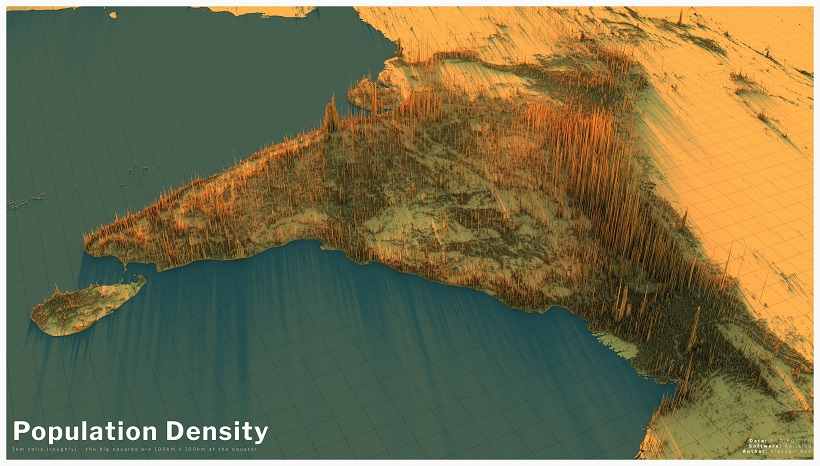 At 1.38 billion people, India’s population is just behind China’s in terms of size. However, this sizable population fits into an area just one-third of China’s total land area, with the above map demonstrating what the same amount of people looks like in a smaller region.

On one hand, you still have clear clusters, such as in Mumbai, New Delhi, Kolkata, and Bangladesh’s Dhaka. On the other, there is a finite amount of room for a massive amount of people, so those density “spikes” are more like density “peaks” with the entire country covered in high density bars.

However, we can still see geographic trends. India’s population is more densely focused in the North before fading into the Himalayas. Bangladesh is equally if not more densely populated, with the exception of the protected Sundarbans mangrove forest along the coast. And Pakistan’s population seen in the distance is clustered along the Indus River. 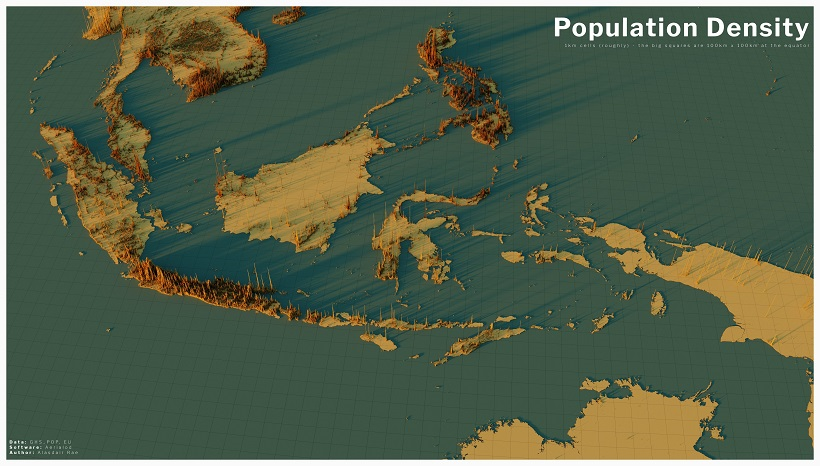 Geographic constraints have always been the biggest deciding factor when it comes to population density, and nowhere is this more apparent than Southeast Asia.

Take Indonesia, the fourth largest country by population. Despite spanning across many islands, more than half of the country’s 269 million inhabitants are clustered on the single island of Java. The metros of Jakarta and Surabaya have experienced massive growth, but spreading that growth across oceans to entirely new islands (covered by rainforests) is a tall order.

When the distance is smaller, that cross-water growth is more likely to occur. Nearby in the Philippines, more than 100 million people have densely populated a series of islands no bigger than the state of Arizona.

Indeed, despite being one of the most populated areas in the world, each country in Southeast Asia has had its own growing problems. Some are limited by space (Singapore, Philippines), while others are limited by forests (Thailand, Vietnam).

A World of Different Density Pictures

Though the above maps cover the five most populated countries on Earth, accounting for nearly half of the world’s population, they only show a small part of the global picture.

As the full global density map at the top of the page highlights, the population patterns can accurately illustrate some geographic patterns and constraints, while others need further exploration.

For example, the map clearly gives an outline of Africa and the sparse area that makes up the Sahara Desert. At the same time, landmasses like Australia and New Zealand are almost invisible save for a few clusters along the coast.

To get a closer and more intricate picture of each country’s density map, head to Alasdair Rae’s long thread of rendered maps and start scrolling up to find yours!