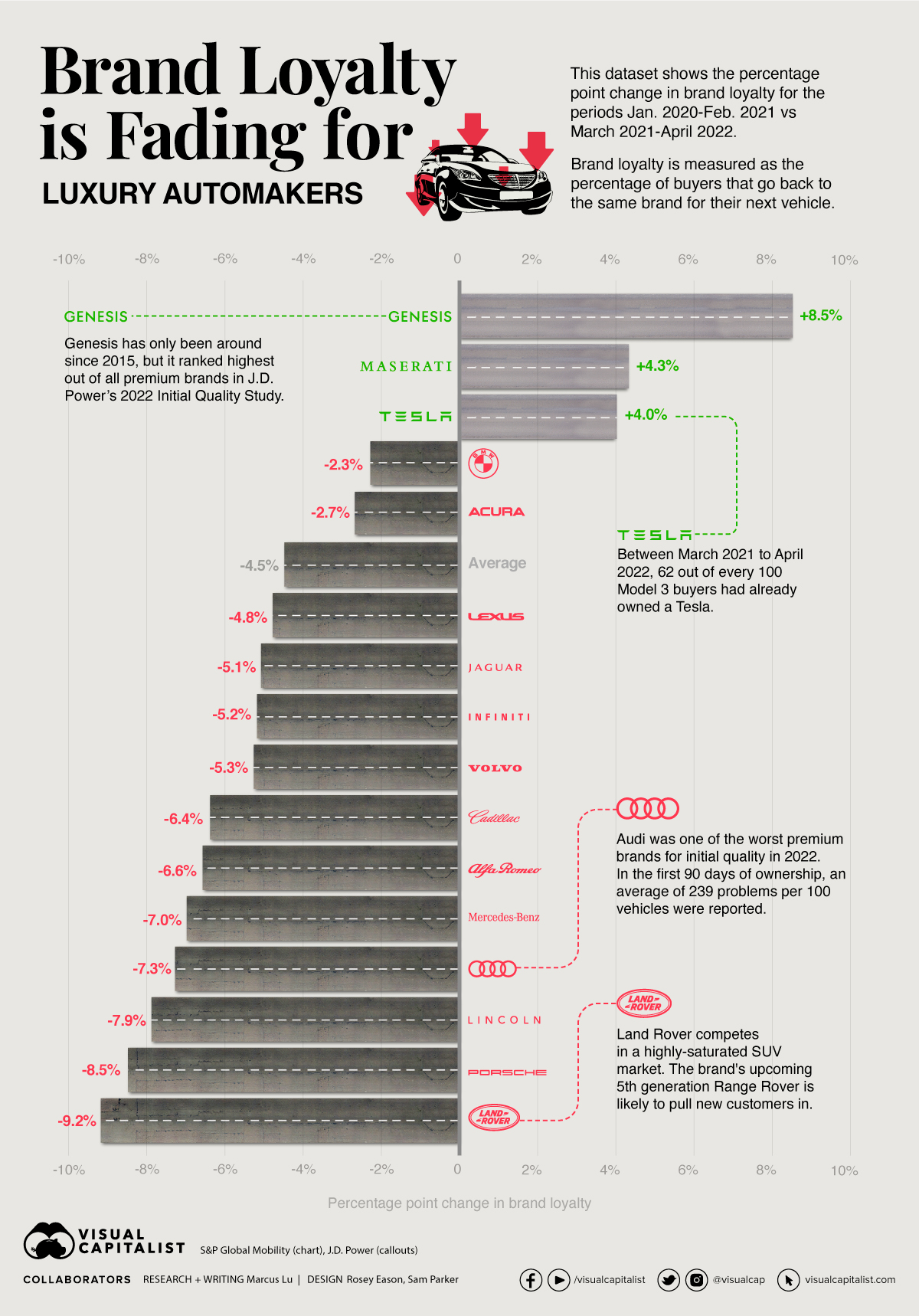 Brand Loyalty is Declining for Most Luxury Automakers

New research conducted by S&P Global Mobility has found that brand loyalty—measured as the percentage of buyers that go back to the same brand for their next vehicle—is falling across the luxury segment.

In this infographic, we’ve visualized the results of this research, which spans from January 2020 to April 2022.

The following brands have all experienced a drop in brand loyalty over the time period.

For additional context, we’ve also included each brand’s score in the J.D. Power 2022 Initial Quality Study. This is measured based on the number of problems experienced per 100 vehicles (PP100) in the first 90 days of ownership.

Land Rover experienced the biggest drop in loyalty, despite a better than average PP100 rating. One potential reason is timing⁠—the brand’s premier model, the Range Rover, has been in its fourth generation since 2012. The SUV has become relatively dated, though a new fifth generation was recently revealed for the 2022 model year.

Two Volkswagen Group brands, Audi and Porsche, also fared poorly in terms of loyalty. This is somewhat surprising, as both brands offer a portfolio of both gasoline and electric models. Many competitors, such as Acura, Lexus, and Maserati, have yet to release an EV.

Three brands have managed to buck the trend, as shown below.

We can draw parallels between Tesla and Apple, in that both have incredibly loyal followers.

For instance, between March 2021 to April 2022, 62% of buyers/households who returned to market and previously owned a Model 3 purchased a new Tesla. That’s an impressive statistic, especially when we consider Tesla’s history of build quality issues.

Maserati appears to be in the same boat. The Italian automaker has strengthened its brand loyalty by 4.3 percentage points, despite having the luxury segment’s worst PP100. Perhaps build quality matters less than we think.

Another Factor to Consider

Ongoing supply chain issues could also be contributing to wide-spread declines in loyalty. Rather than waiting several months (or in the case of EVs, years), buyers may switch to a different brand that has cars in stock.

We are still monitoring it week to week, but up to now basically worldwide, we had no issues running production.
– Joerg Burzer, Mercedes-Benz

Many automakers have reported that their supply issues are diminishing, though new economic challenges have risen. For example, surging inflation has pushed the price of a new car to record highs. Combined with rising interest rates (cost of borrowing), this could negatively impact the demand for new cars.

The post Brand Loyalty is Declining for Most Luxury Automakers appeared first on Visual Capitalist.