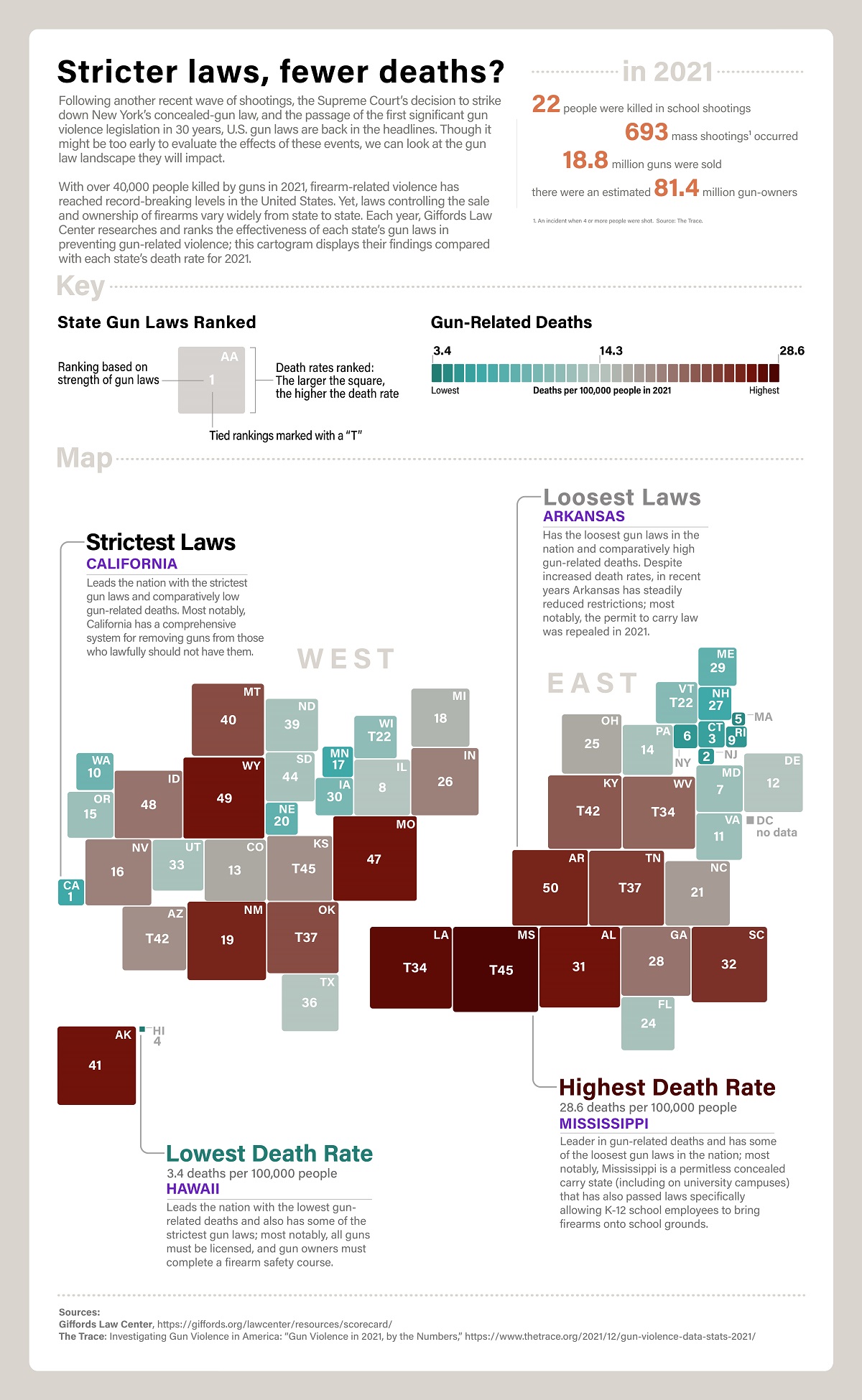 In June 2022, the U.S. Supreme Court’s decision to strike down concealed-gun legislation in New York sent shock waves through the country.

The decision brought renowned attention to the ongoing debate around America’s gun laws—one that Americans have grossly differing views on. This lack of consensus is apparent not just in public opinion, but in legislation, with U.S. firearm regulation varying greatly from state to state.

Which states have the strictest (and loosest) gun regulations around? This graphic by Elbie Bentley sets the ground for comparing gun laws across America before the impact of the Supreme Court’s ruling can be fully understood. It uses 2021 data from Giffords Law Center and contrasts against gun-related deaths in each state.

States With The Strictest Gun Laws

Since 2010, researchers at Giffords Law Center have been ranking state gun laws across America and seeing if there’s a correlation between stricter gun laws and lower gun-related deaths.

Here’s a look at the top 10 states with the strictest gun laws and their number of gun-related deaths in 2021:

California has the strictest gun laws in the country. Some of the state’s most notable legislation is its proactive removal of firearms from people who are facing domestic violence charges, or from people that have domestic abuse protective orders filed against them.

In addition to having the strictest gun laws, California also has a relatively low rate of gun-related deaths, at 8.5 deaths per 100,000 people—37% below the national average.

States With The Loosest Gun Laws

On the opposite end of the spectrum, here’s a look at the 10 states with the loosest gun laws, and their number of gun-related deaths per 100,000 people:

Apart from South Dakota, all states in the bottom 10 have an above-average rate of gun-related deaths. Mississippi has the highest death rate at 28.6 per 100,000, which is 110% above the national average.

In Mississippi, you don’t need a permit to carry a concealed gun—not even on university campuses. And a few years ago, the state passed a law allowing K-12 school employees to bring guns onto school grounds.

Polarizing Opinions and an Uncertain Future

The recent Supreme Court ruling came weeks after dozens were killed in a series of mass shootings across the country—including one in a grocery store in Buffalo, New York, and the other in an elementary school in Uvalde, Texas.

Notably, some states have already reacted to the ruling by altering their gun laws. New York passed new legislation banning guns from notable public places, requiring applicants to prove they can use a gun, and requiring applicants to have their social media accounts reviewed. On the other hand, Maryland loosened its gun laws, directing law enforcement to be less restrictive for concealed carry applicants.

As all of the changes are still happening in rapid session, time will tell what the next annual review of U.S. gun laws shows about the country’s gun regulation landscape.