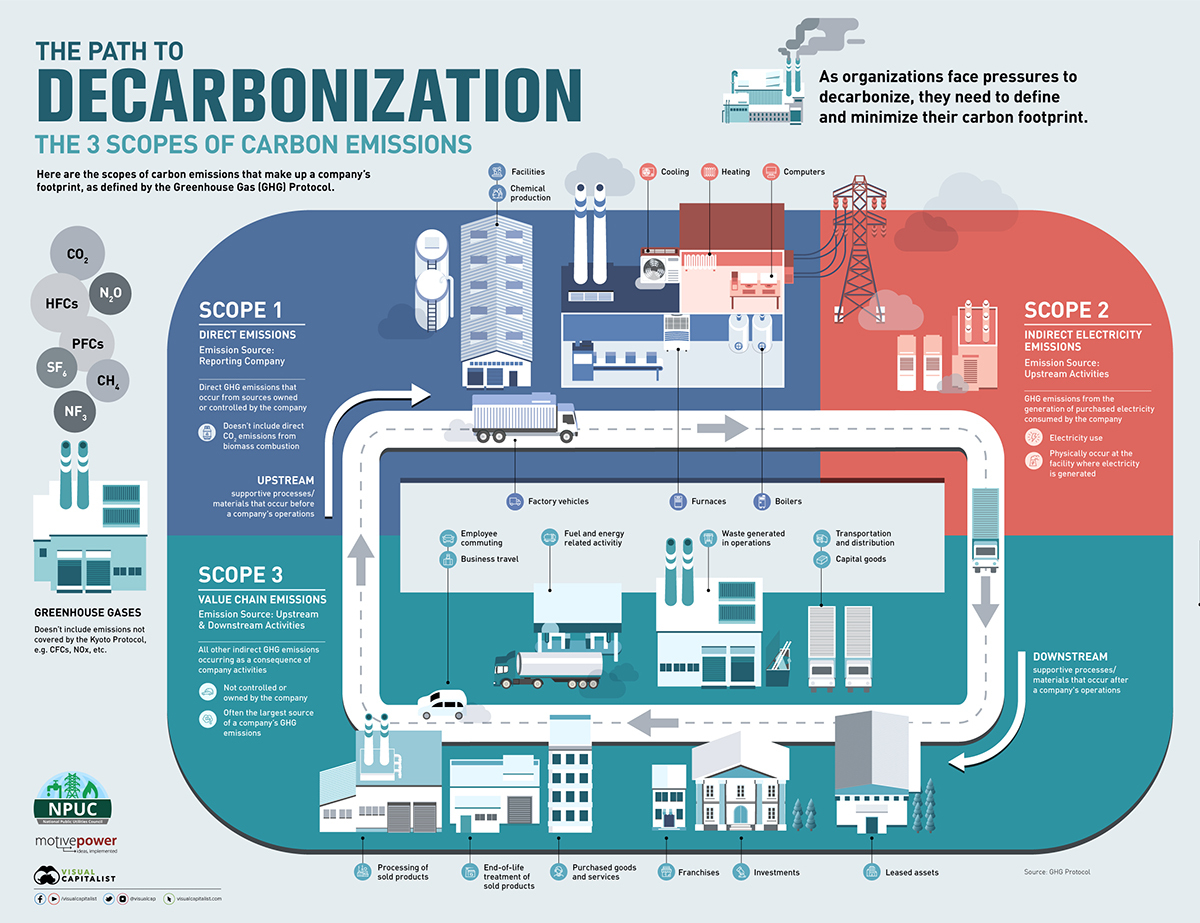 The following content is sponsored by the National Public Utility Council

What Carbon Emissions Are Part Of Your Footprint?

With many countries and companies formalizing commitments to meeting the Paris Agreement carbon emissions reduction goals, the pressure to decarbonize is on.

A common commitment from organizations is a “net-zero” pledge to both reduce and balance carbon emissions with carbon offsets. Germany, France and the UK have already signed net-zero emissions laws targeting 2050, and the U.S. and Canada recently committed to synchronize efforts towards the same net-zero goal by 2050.

As organizations face mounting pressure from governments and consumers to decarbonize, they need to define the carbon emissions that make up their carbon footprints in order to measure and minimize them.

This infographic from the National Public Utility Council highlights the three scopes of carbon emissions that make up a company’s carbon footprint.

The 3 Scopes of Carbon Emissions To Know

The most commonly used breakdown of a company’s carbon emissions are the three scopes defined by the Greenhouse Gas Protocol, a partnership between the World Resources Institute and Business Council for Sustainable Development.

These emissions are direct GHG emissions that occur from sources owned or controlled by the company, and are generally the easiest to track and change. Scope 1 emissions include:

These emissions are indirect GHG emissions from the generation of purchased electricity consumed by the company, which requires tracking both your company’s energy consumption and the relevant electrical output type and emissions from the supplying utility. Scope 2 emissions include:

The Carbon Emissions Not Measured

Most uses of the GHG Protocol by companies includes many of the most common and impactful greenhouse gases that were covered by the UN’s 1997 Kyoto Protocol. These include carbon dioxide, methane, and nitrous oxide, as well as other gases and carbon-based compounds.

But the standard doesn’t include other emissions that either act as minor greenhouse gases or are harmful to other aspects of life, such as general pollutants or ozone depletion.

These are emissions that companies aren’t required to track in the pressure to decarbonize, but are still impactful and helpful to reduce:

There are many different types of carbon emissions for companies (and governments) to consider, measure, and reduce on the path to decarbonization. But that means there are also many places to start.

National Public Utilities Council is the go-to resource for all things decarbonization in the utilities industry. Learn more.

The post Decarbonization 101: What Carbon Emissions Are Part Of Your Footprint? appeared first on Visual Capitalist.