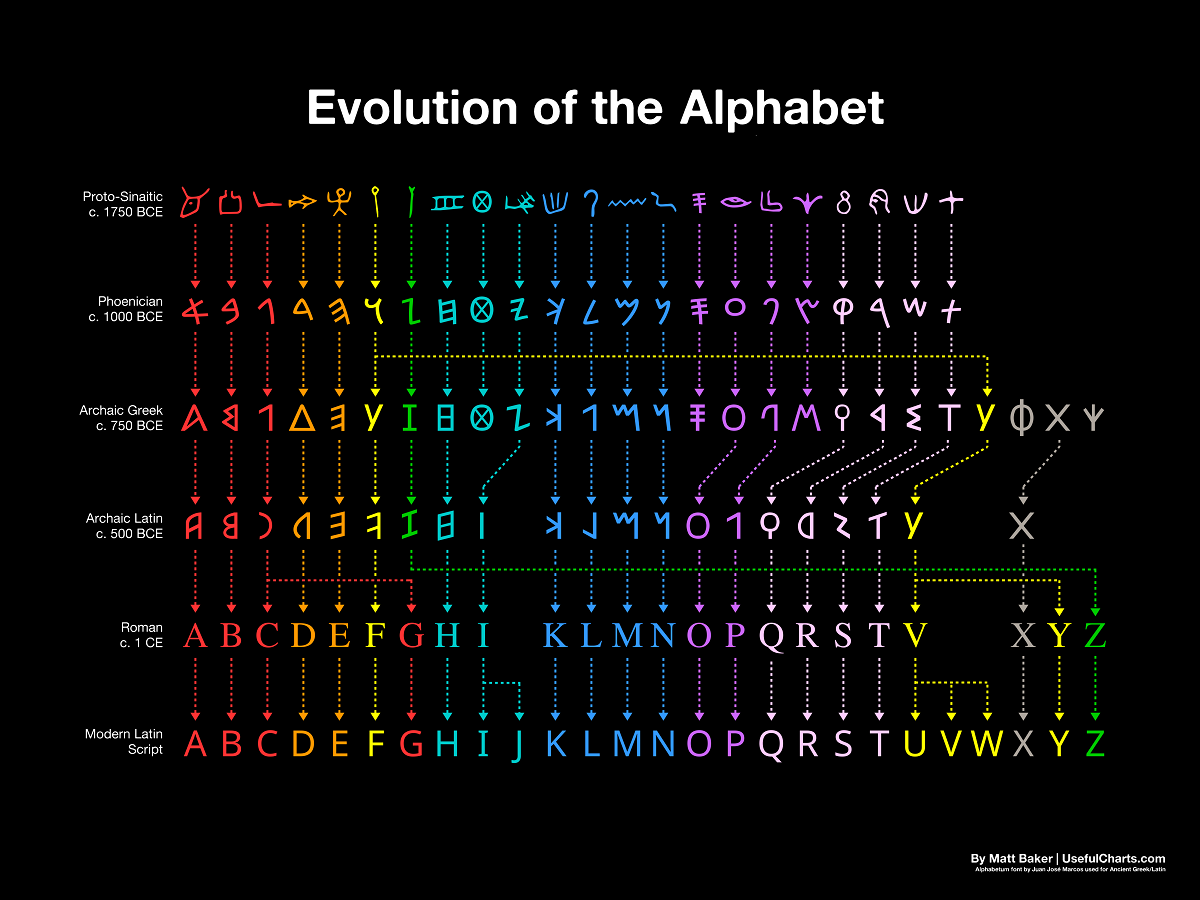 From Greek to Latin: Visualizing the Evolution of the Alphabet

Over the course of 2021, the Greek alphabet was a major part of the news cycle.

COVID-19 variants, which are labeled with Greek letters when becoming a variant of concern, normalized their usage. From the Alpha variant in the UK, to the Delta variant that spread from India to become the dominant global strain, the Greek alphabet was everywhere. Seemingly overnight, the Omicron variant discovered in South Africa has now taken the mantle as the most discussed variant.

But the Greek alphabet is used in other parts of our lives as well. For example, Greek letters are commonly used in mathematics and science, like Sigma (Σ) denoting a sum or Lambda (λ) used to represent the half-life of radioactive material.

And the study of linguistics shows us why using Greek letters in English isn’t completely farfetched. This visualization from Matt Baker at UsefulCharts.com demonstrates how the modern Latin script used in English evolved from Greek, and other, alphabets.

It’s All Proto-Sinaitic to Me

Before there was English, or Latin, or even Greek, there was Proto-Sinaitic.

Considered the first alphabet ever used, the Proto-Sinaitic script was derived in Canaan, around the biblical Land of Israel. It was repurposed from Egyptian hieroglyphs that were commonly seen in the area (its name comes from Mount Sinai), and used to describe sounds instead of meanings.

As the first Semitic script, Proto-Sinaitic soon influenced other Semitic languages. It was the precursor to the Phoenician alphabet, which was used in the area of modern-day Lebanon and spread across the Mediterranean and became the basis for Arabic, Cyrillic, Hebrew, and of course, Greek.

Evolving into the Greek, Roman, and Latin Alphabets

Over time, the alphabet continued to become adopted and evolve across different languages.

The first forms of the Archaic Greek script are dated circa 750 BCE. Many of the letters remained in Modern Greek, including Alpha, Beta, Delta, and even Omicron, despite first appearing more than 2,500 years ago.

Soon the Greek alphabet (and much of its culture) was borrowed into Latin, with Archaic Latin script appearing circa 500 BCE. The evolution into Roman script, with the same recognizable letters used in modern English, occurred 500 years later in 1 CE.

Many of the letters which first came from Egyptian hieroglyphs made their way into modern English, but they took a long and convoluted journey. As the graphic above highlights, some letters evolved into multiple forms, while others fell out of use entirely.

And this is just a snapshot of the many scripts and languages that the modern English alphabet evolved from. Lowercase letters came from Roman cursive, which evolved into the Insular and Carolingian scripts before becoming modern lowercase English.

Like many things in the long arc of human culture, alphabets are not as far removed from each other as you might think.

The post From Greek to Latin: Visualizing the Evolution of the Alphabet appeared first on Visual Capitalist.