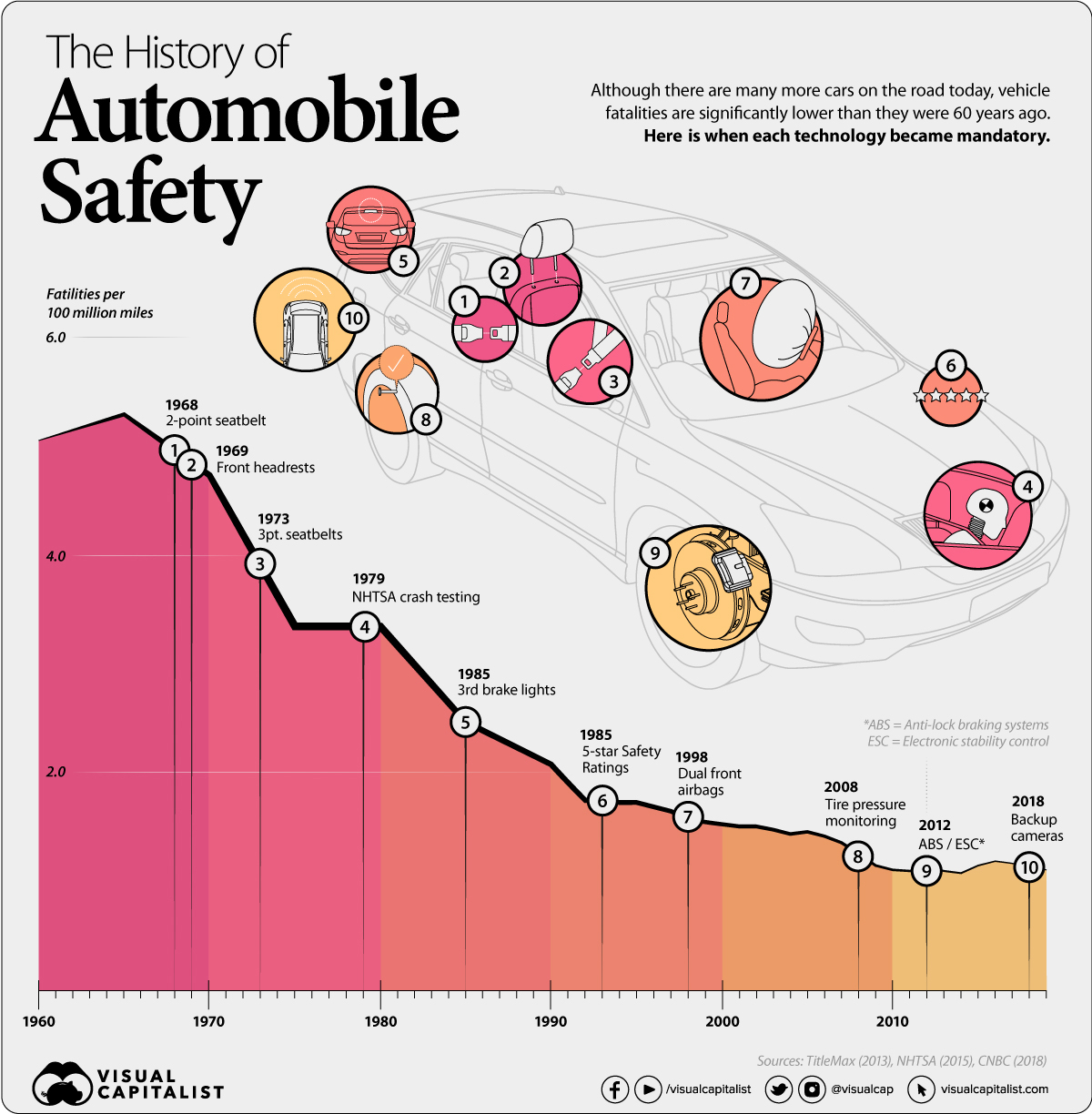 How Has Car Safety Improved Over 60 Years?

This resulted in 36,096 deaths over the year—an awful statistic to say the least—but one that would be much worse if it weren’t for seatbelts, airbags, and other modern safety devices.

In this infographic, we’ve visualized data from the U.S. Bureau of Transportation to show how breakthroughs in car safety have drastically reduced the number of motor vehicle fatalities.

The data shows the number of fatalities for every 100 million miles driven. From a high of 5.1 in 1960 (the first year data is available), we can see that this metric has fallen by 78% to just 1.1.

What makes this even more impressive is the fact that there are more cars on the road today than in 1960. This can be measured by the total number of miles driven each year.

So, while the total number of miles driven has increased by 371%, the rate of fatalities has decreased by 78%. Below, we’ll take a closer look at some important car safety innovations.

The introduction of seatbelts was a major stepping stone for improving car safety, especially as vehicles became capable of higher speeds.

The first iteration of seatbelts were a 2-point design because they only looped across a person’s waist (and thus had 2 points of mounting). This design is flawed because it doesn’t hold our upper body in place during a collision.

Today’s seatbelts use a 3-point design which was developed in 1959 by Nils Bohlin, an engineer at Volvo. This design adds a shoulder belt that holds our torso in place during a collision. It took many years for Volvo to not only develop the device, but also to convince the public to use it. The U.S., for instance, did not mandate 3-point seatbelts until 1973.

The concept of an airbag is relatively simple—rather than smacking our face against the steering wheel, we cushion the blow with an inflatable pillow.

In practice, however, airbags need to be very precise because it takes just 50 milliseconds for our heads to collide with the wheel in a frontal crash. To inflate in such a short period of time, airbags rely on a chemical reaction using sodium azide.

The design of an airbag’s internal mechanism can also cause issues, as was discovered during the Takata airbag recall. As these airbags inflated, there was a chance for them to also send metal shards flying through the cabin at high speeds.

Dual front airbags (one for each side) were mandated by the U.S. government in 1998. Today, many cars offer side curtain airbags as an option, but these are not required by law.

Backup cameras became a legal requirement in May 2018, making them one of the newest pieces of standard safety equipment in the U.S. These cameras are designed to reduce the number of backover crashes involving objects, pedestrians, or other cars.

Measuring the safety benefits of backup cameras can be tricky, but a 2014 study did conclude that cameras were useful for preventing collisions. A common criticism of backup cameras is that they limit our field of vision, as opposed to simply turning our heads to face the rear.

Taking Car Safety to the Next Level

According to the National Highway Traffic Safety Administration (NHTSA), having both seatbelts and airbags can reduce the chance of death from a head-on collision by 61%. That’s a big reduction, but there’s still plenty of room left on the table for further improvements.

As a result, automakers have been equipping their cars with many technology-enabled safety measures. This includes pre-collision assist systems which use sensors and cameras to help prevent an accident. These systems can prevent you from drifting into another lane (by actually adjusting the steering wheel), or apply the brakes to mitigate an imminent frontal collision.

Whether these systems have any meaningful benefit remains to be seen. Referring to the table above shows that fatalities per 100 million miles have not fallen any further since 2010.

The post How Has Car Safety Improved Over 60 Years? appeared first on Visual Capitalist.