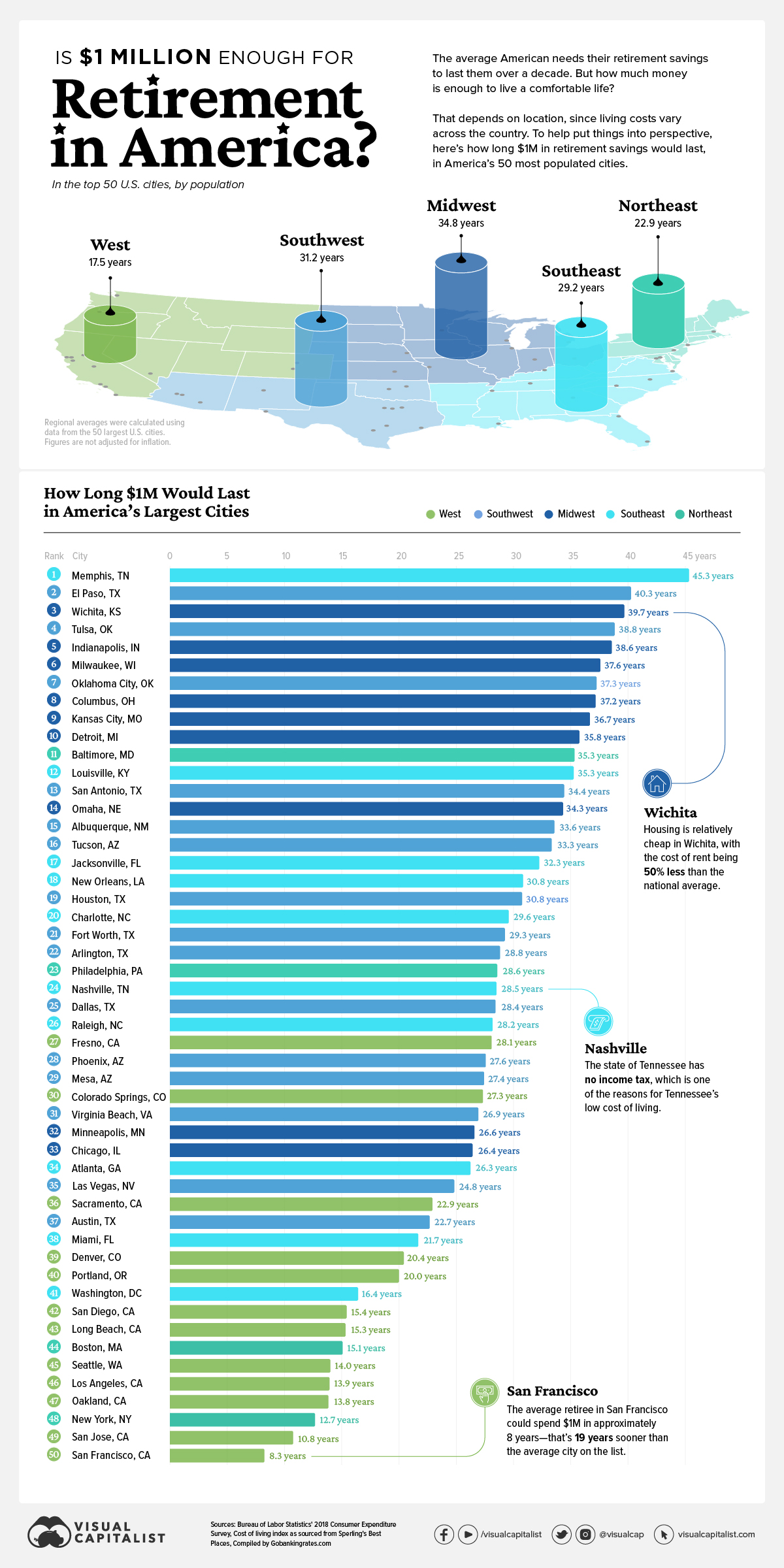 Is $1 Million Enough for Retirement in America?

The average American needs their retirement savings to last them 14 to 17 years. With this in mind, is $1 million in savings enough for the average retiree?

Ultimately, it depends on where you live, since the average cost of living varies across the country. This graphic, using data compiled by GOBankingRates.com shows how many years $1 million in retirement savings lasts in the top 50 most populated U.S. cities.

Editor’s note: As one user rightly pointed out, this analysis doesn’t take into account interest earned on the $1 million. With that in consideration, the above calculations could be seen as very conservative figures.

How Long $1 Million Would Last in 50 Cities

To compile this data, GOBankingRates calculated the average expenditures of people aged 65 or older in each city, using data from the Bureau of Labor Statistics and cost-of-living indices from Sperling’s Best Places.

That figure was then reduced to account for average Social Security income. Then, GOBankingRates divided the one million by each city’s final figure to calculate how many years $1 million would last in each place.

Perhaps unsurprisingly, San Francisco, California came in as the most expensive city on the list. $1 million in retirement savings lasts approximately eight years in San Francisco, which is about half the time that the typical American needs their retirement funds to last.

Four of the top five most expensive cities on the list are in California, with New York City being the only outlier. NYC is the third most expensive city on the ranking, with $1 million expected to last a retiree about 12.7 years.

Regardless of where you live, it’s helpful to start planning for retirement sooner rather than later. But according to a recent survey, only 41% of women and 58% of men are actively saving for retirement.

However, for some, COVID-19 has been the financial wake-up call they needed to start planning for the future. In fact, in the same survey, 70% of respondents claimed the pandemic has “caused them to pay more attention to their long-term finances.”

This is good news, considering that people are living longer than they used to, meaning their funds need to last longer in general (or people need to retire later in life). Although, as the data in this graphic suggests, where you live will greatly influence how much you actually need.

The post Is $1 Million Enough for Retirement in America? appeared first on Visual Capitalist.