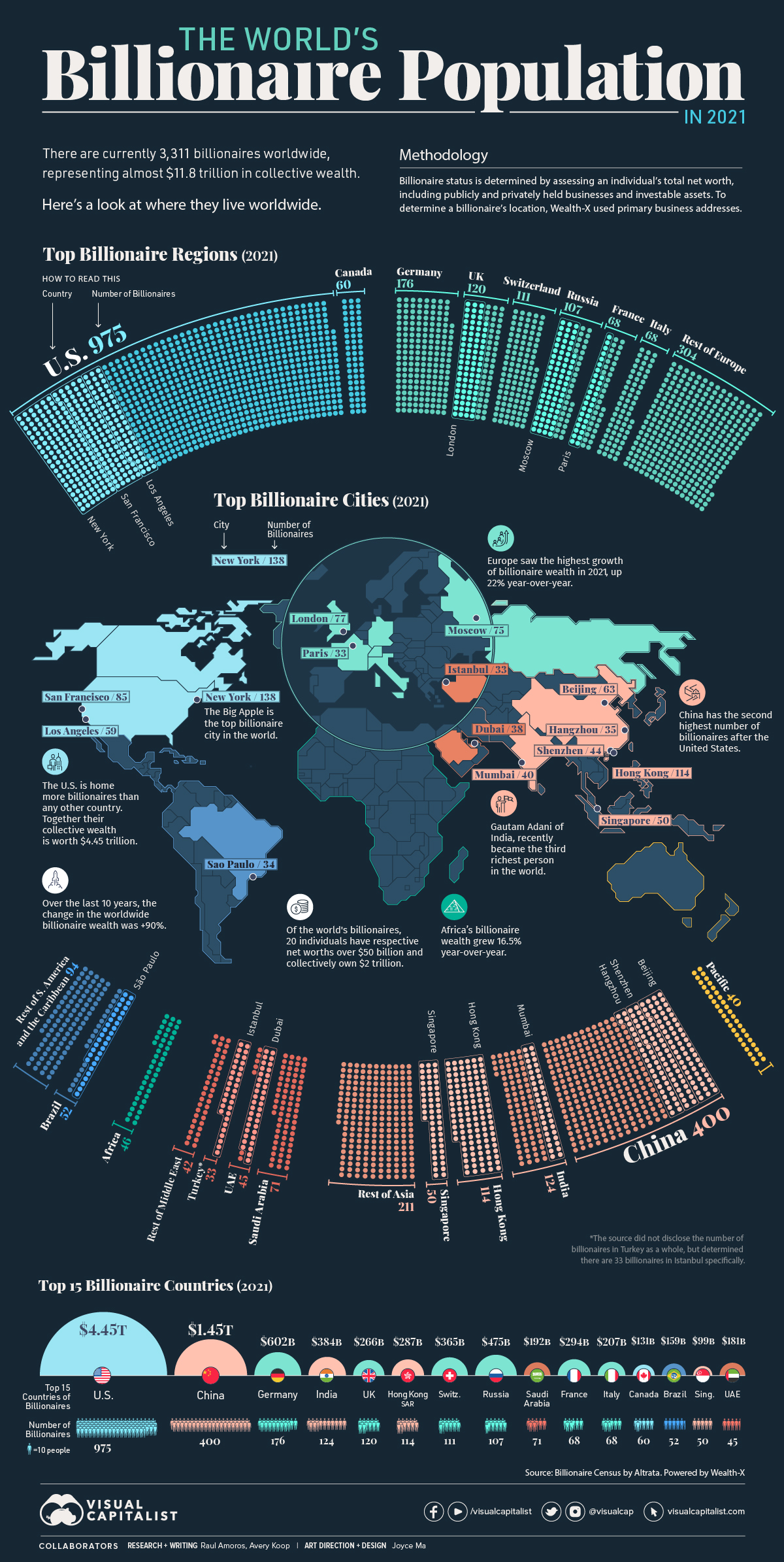 The world’s billionaires—only 3,311 individuals—represent almost $11.8 trillion in wealth. The global billionaire population continued to grow in 2021, increasing by 3%. Over the same period, billionaire wealth also increased by 18%.

This map uses data from the Wealth-X Billionaire Census to visualize where the world’s billionaires live and breaks down their collective wealth.

Note on methodology: The report uses proprietary data from Wealth-X. Billionaire status is determined by assessing an individual’s total net worth, including publicly and privately held businesses and investable assets. To determine a billionaire’s location, Wealth-X used their primary business address.

We’ll begin by zooming out to look at how various continents and world regions rank in terms of their billionaire population.

North America is home to most billionaires, worth $4.6 trillion. The U.S., unsurprisingly, accounts for the majority of this wealth, with 975 billionaires and a collective net worth of $4.45 billion.

In regional terms, Europe’s billionaire wealth is growing the fastest, up 22% year-over-year in 2021. In contrast, the year-over-year change in the Middle East was -12.5%.

Asia is inching towards Europe, holding almost a quarter of all billionaire wealth worldwide, compared to Europe’s 26.5%.

Wealth in Africa will also be important to watch in coming years. Although only home to 46 billionaires currently, the change in billionaire wealth increased by almost 17% year-over-year. Additionally, while they no longer live there, a number of the world’s billionaires hail from African countries originally.

Now, let’s look at the ranking broken down by the top 15 countries:

China is an obvious second in billionaire wealth to the United States, with famous billionaires like Zhang Yiming ($44.5 billion) of TikTok and Zhong Shanshan ($67.1 billion), whose wealth primarily comes from the pharmaceutical and beverages industries.

That said, Chinese billionaire wealth actually decreased 2% last year. It was India that came out on top in terms of growth, seeing a 19% increase in 2021.

Looking at cities, New York is home to the most billionaires—with 13 added billionaire residents last year—followed by Hong Kong.

Billionaires have significant power and influence, not in the least because their collective wealth is equivalent to about 11.8% of global GDP.

In recent billionaire news, Gautam Adani’s wealth has been soaring, most recently hitting the $145 billion mark, making him the third-richest person in the world according to Bloomberg’s Billionaire Index. However, not all billionaires are holding on to their wealth. Patagonia founder, Yvon Chouinard, recently transferred ownership of his company to an organization that fights climate change.

Over the last decade, billionaires have been grown their fortunes considerably, with wealth increasing at a faster rate than the growth in the number of billionaires themselves. According to Wealth-X, collective billionaire net worth grew by an astonishing 90% in the last 10 years.

But in the shorter term, the situation is often more volatile. With markets reeling in 2022, Bloomberg reported that billionaires lost a record $1.4 trillion over the first half of the year. Once the year is over and the final numbers are in, it will be interesting to see how the billionaire landscape shapes up in comparison to the more long-term trend.