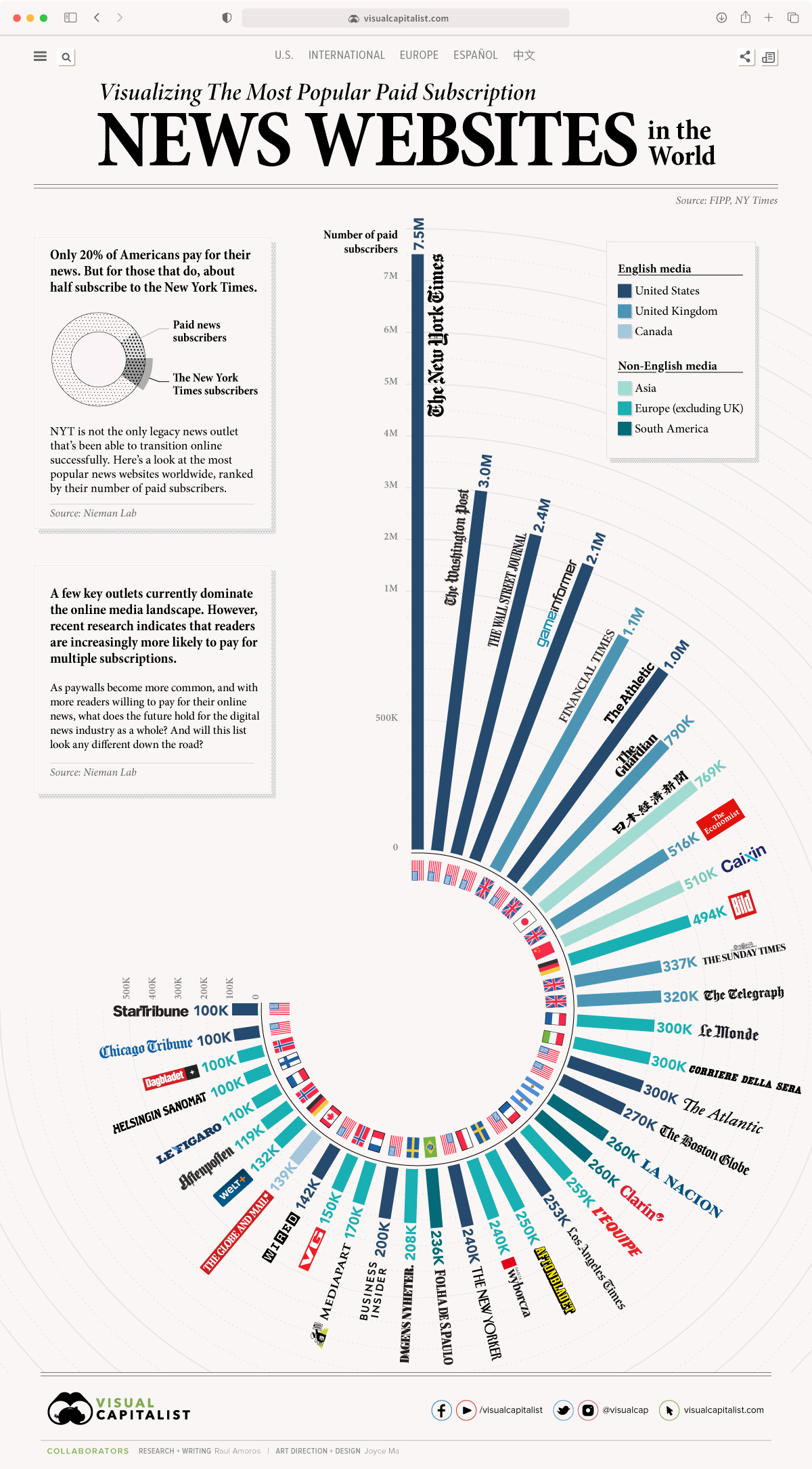 While paywalls are becoming increasingly more popular among news websites, most consumers still aren’t willing to pay for their online news.

In fact, a recent survey by the Reuters Institute for the Study of Journalism reveals that only 20% of Americans pay for digital news, and of those that do, the majority subscribe to only one brand.

This begs the question—which news outlets are audiences willing to pay for?

Using data from FIPP and CeleraOne, this graphic looks at the most popular news websites across the globe, based on their total number of paid subscriptions.

*Note: This report relies on publicly available data, and should not be considered an exhaustive list.

With 7.5 million subscriptions, The New York Times (NYT) takes the top spot on the list. 2020 was an exceptionally strong year for the outlet—by Q3 2020, the NYT had generated the same amount of revenue from digital subscriptions as it had for the entire year of 2019.

The Times is the most popular by a landslide—it has over double the number of subscriptions than the second outlet on the list, The Washington Post. Yet, while WaPo is no match for NYT, it still boasts a strong following, with approximately 3 million paid subscriptions as of Q4 2020.

Most of the websites on this list stem from traditional media. Because of this, they’ve had years to establish themselves as trusted sources, and win over loyal readers.

Interestingly, more than half of the outlets included in this ranking are at least 100 years old.

Yet, undeterred by these well-established outlets, a few scrappy websites made the cut despite a shorter history. Four out of the 38 websites are less than 20 years old.

The Athletic is the newest outlet to make the ranking. Established in 2016, the outlet’s target demographic is die-hard sports fans who miss the days of in-depth, quality sports writing.

The Need For Trusted Sources

Amidst the global pandemic, issues involving misinformation and fake news have helped reaffirm the important role that trusted news sources play in the dissemination of public information.

With this in mind, it’ll be interesting to see what the future holds for digital media consumption. With paywalls becoming increasingly more common, will consumers jump on board and eventually be more willing to pay for their news?