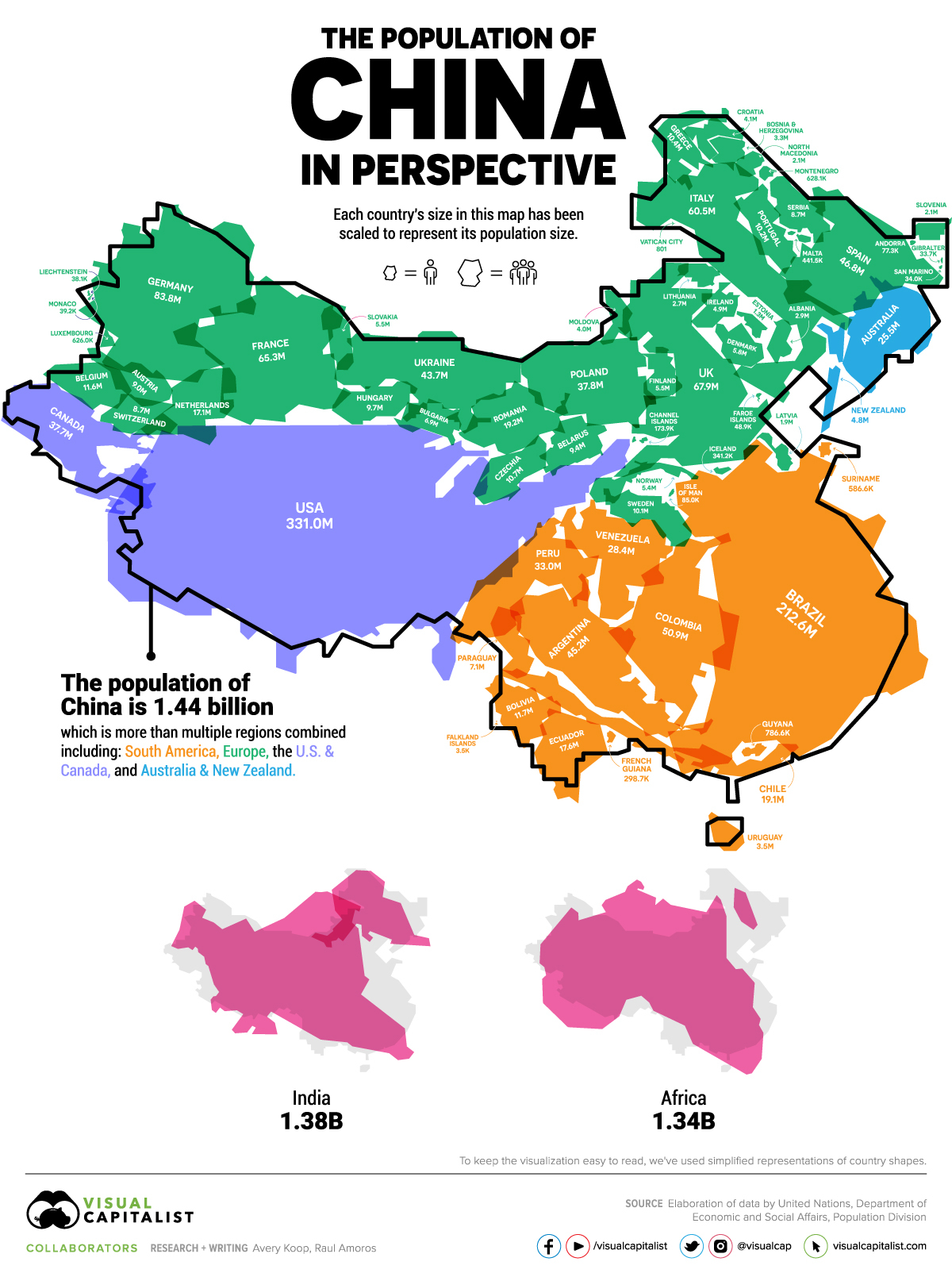 The Population of China in Perspective

China is the world’s most populous country with an astounding 1.44 billion citizens. Altogether, the size of the population of China is larger than nearly four regions combined: South America, Europe (excluding Russia), the U.S. & Canada, and Australia & New Zealand.

Using data from the United Nations, this unconventional map reveals the comparative size of China’s population next to a multitude of other countries.

Note: To keep the visualization easy to read, we’ve simplified the shapes representing countries. For example, although we’ve included Alaska and Hawaii in U.S. population totals, the U.S. is represented by the contiguous states map only.

Looking at history, the population of China has more than doubled since the 1950s. The country was the first in the world to hit one billion people in 1980.

However, in 1979, in an attempt to control the burgeoning population, the infamous one-child policy was introduced, putting controls on how many children Chinese citizens could have.

While the government eventually recognized the negative implications of this policy, it appeared to be too little, too late. The two-child policy was introduced in 2016, but it has not yet reversed the current slowdown in population growth.

The fertility rate has been consistently falling from over 6 births per woman in 1955 to 1.69 in 2020. Today, the median age in China is 38 years old, rising from 22 in 1955. Longer life spans and fewer births form a demographic trend that has many social and economic implications.

Despite these trends, however, China’s current population remains massive, constituting almost 20% of the world’s total population. Right now 71% of the Chinese population is between the ages of 15 and 65 years old, meaning that the labor supply is still immense.

Here are the populations of 65 countries from various regions of the world—and added together, you’ll see they still fall short of the population of China:

To break it down even further, here’s a look at the population of each of the regions listed above:

Combined their population is 1.432 billion compared to China’s 1.439 billion.

Overall, the population of China has few comparables. India is one exception, with a population of 1.38 billion. As a continent, Africa comes in close as well at 1.34 billion people.

Future Outlook on the Population of China

Whether or not China’s population growth is slowing appears to be less relevant when looking at its sheer size. While India is expected to match the country’s population by 2026, China will remain one of the world’s largest economic powerhouses regardless.

It is estimated, however, that the population of China will drop below one billion people by the year 2100—bumping the nation to third place in the ranking of the world’s most populous countries. At the same time, it’s possible that China’s economic dominance may be challenged by these same demographic tailwinds as time moves forward.

The post The Population of China Compared with the Rest of the World appeared first on Visual Capitalist.