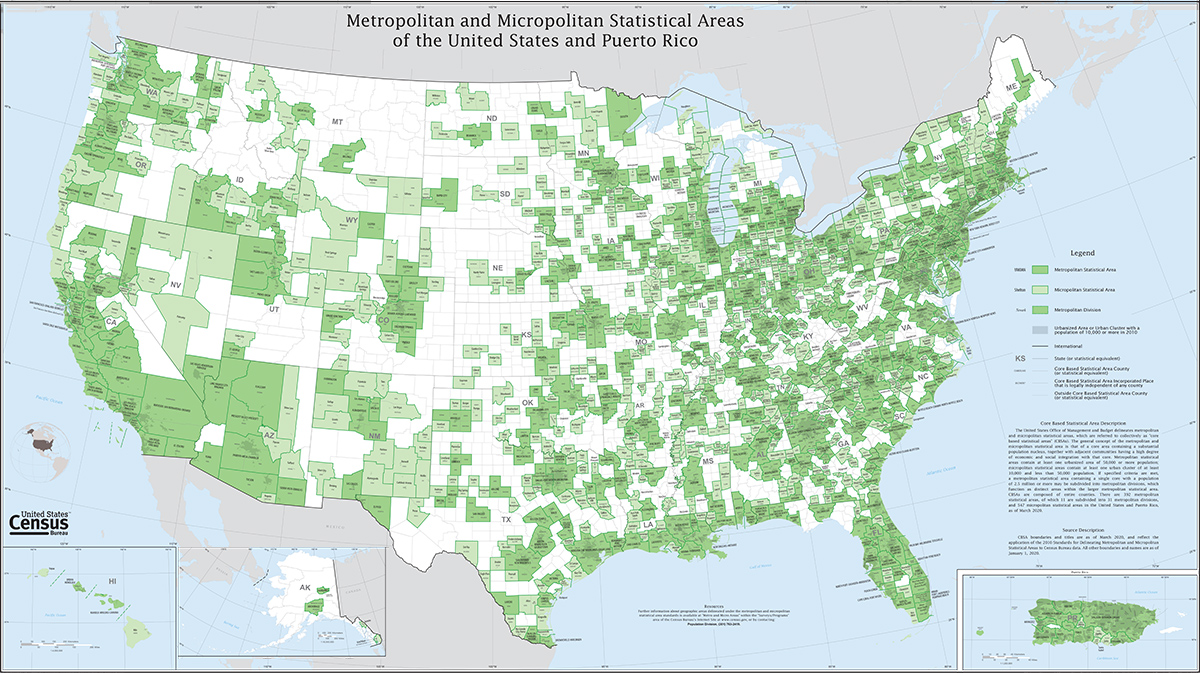 This Giant Map Shows All the Metropolitan Areas in the U.S.

The United States is the third most populous country in the world, made up of close to 20,000 cities and towns, and 333 million individuals.

Dividing these population clusters into a coherent framework of statistical areas is no small feat, and the U.S. Census Bureau’s latest map shows just how complex of a task it is.

From Metro to Micro

The wide variety of population patterns around the country can make it tricky to divide regions up into uniform units. There are two main divisions to consider when viewing this map:

One thing to note about all of these definitions is that the cities in these regions must have significant ties to a neighboring region—usually in the form of commuting ties. This is what warrants binding adjacent counties into a measurable area.

Another unique layer of data on this map is the shading that indicates the actual urbanized area within metro areas. In the example of Atlanta-Sandy Springs-Alpharetta, it’s easy to see how urban sprawl has expanded the urban area into a number of neighboring counties.

With this context in mind, we’ll take a closer look at three points of interest on the map that show this concept at work with varying degrees of complexity.

Level One: The Central City

The Texas Triangle offers what is perhaps the most straightforward example of metro areas. 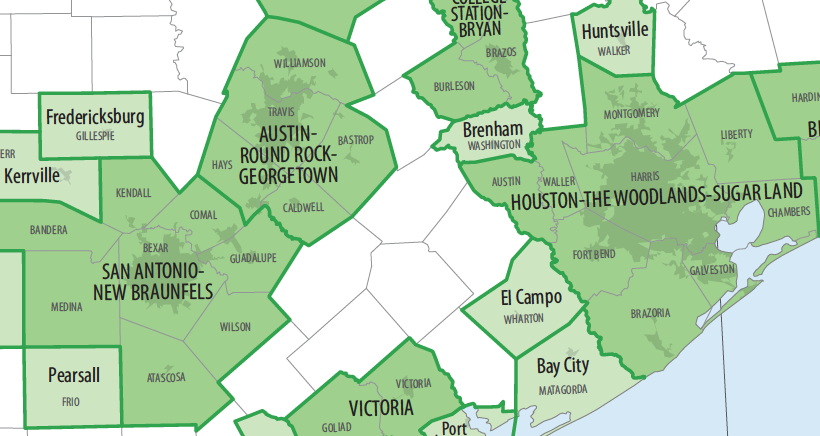 As seen above, Houston, Austin, and San Antonio anchor their respective regions, and surrounding counties are bundled into a metro area. The surrounding counties have all been identified as having ties to the central county, and, in some cases, the urban area has spread into the neighboring county over time. 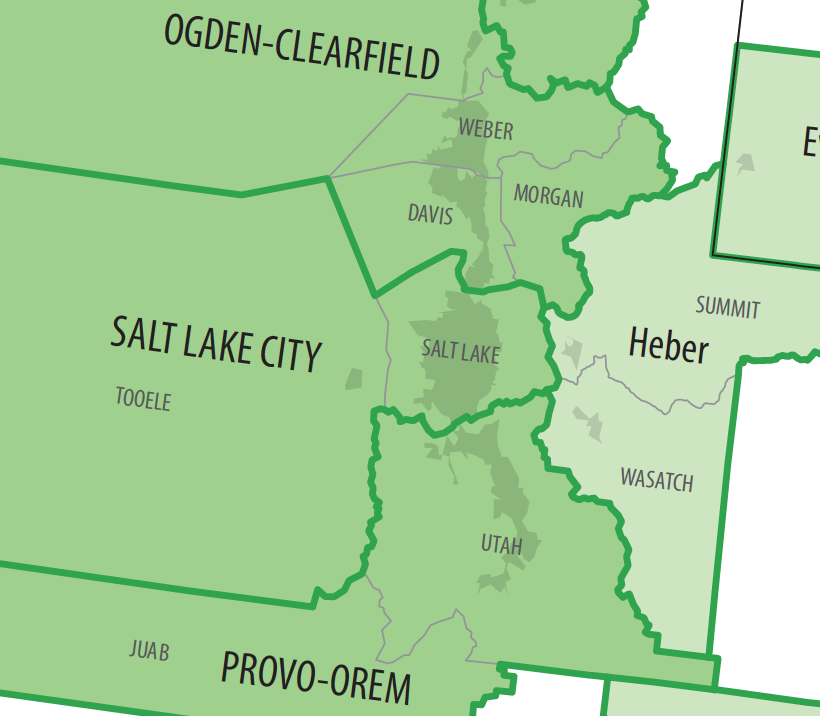 While there are a number of population centers in the area, including Salt Lake City, Provo, and Ogden, they all have enough of an economic “magnetic pull” to warrant splitting the region into distinct statistical areas.

Of course, regions are always evolving, and occasionally these areas are updated. Salt Lake City and Ogden were previously combined into a single metro area, but were separated in 2005.

New York City is the ultimate challenge for planners looking to categorize population centers into a neat and tidy statistical box.

For one, the contiguous urban area is massive, stretching from the west side of Long Island out to the east side of New Jersey. In addition to New York City itself, the metro area includes 19 other municipalities with over 100,000 people.

Next, NYC is an unparalleled economic magnet. Measuring commuting activity is a challenge because a wide variety of people visit the city for so many different reasons. The interconnectedness of the Northeast Megaregion also adds to the complexity. 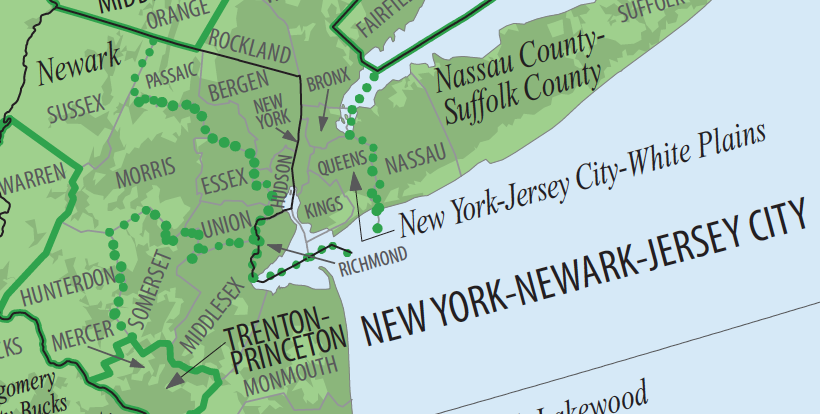 New York-Newark-Jersey City is such a big pie to carve up, that four of the country’s 11 metro divisions (as indicated by the italicized text and dotted lines) occur in this one area.

Population patterns are constantly changing across the country, so the next version of this map may have a number of changes on it. Our “straightforward” Texas Triangle example may become tougher to divide up as the population boom continues in the region.

Here’s how the population of U.S. countries changed over the past decade: 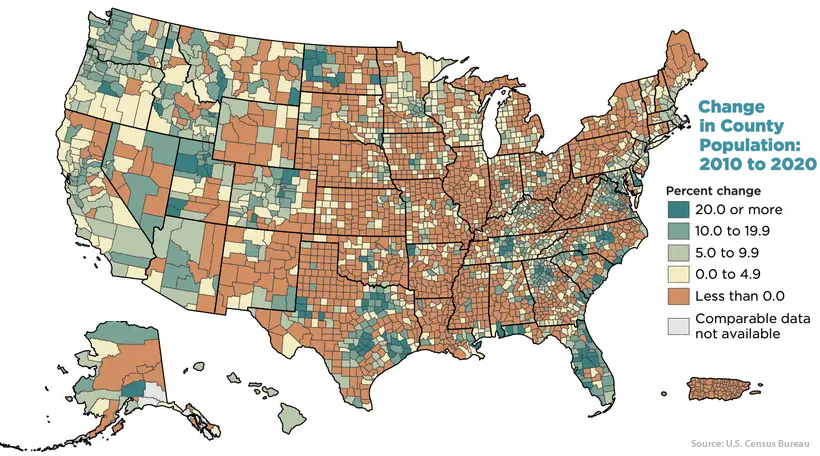 Further complicating matters is the rapid move to remote work and distributed teams. A key element of these census divisions are commuting ties. With work increasingly not bound by geographic limitations, it remains unclear how that trend will impact this type of statistical exercise in the future.

The post This Giant Map Shows All the Metropolitan Areas in the U.S. appeared first on Visual Capitalist.