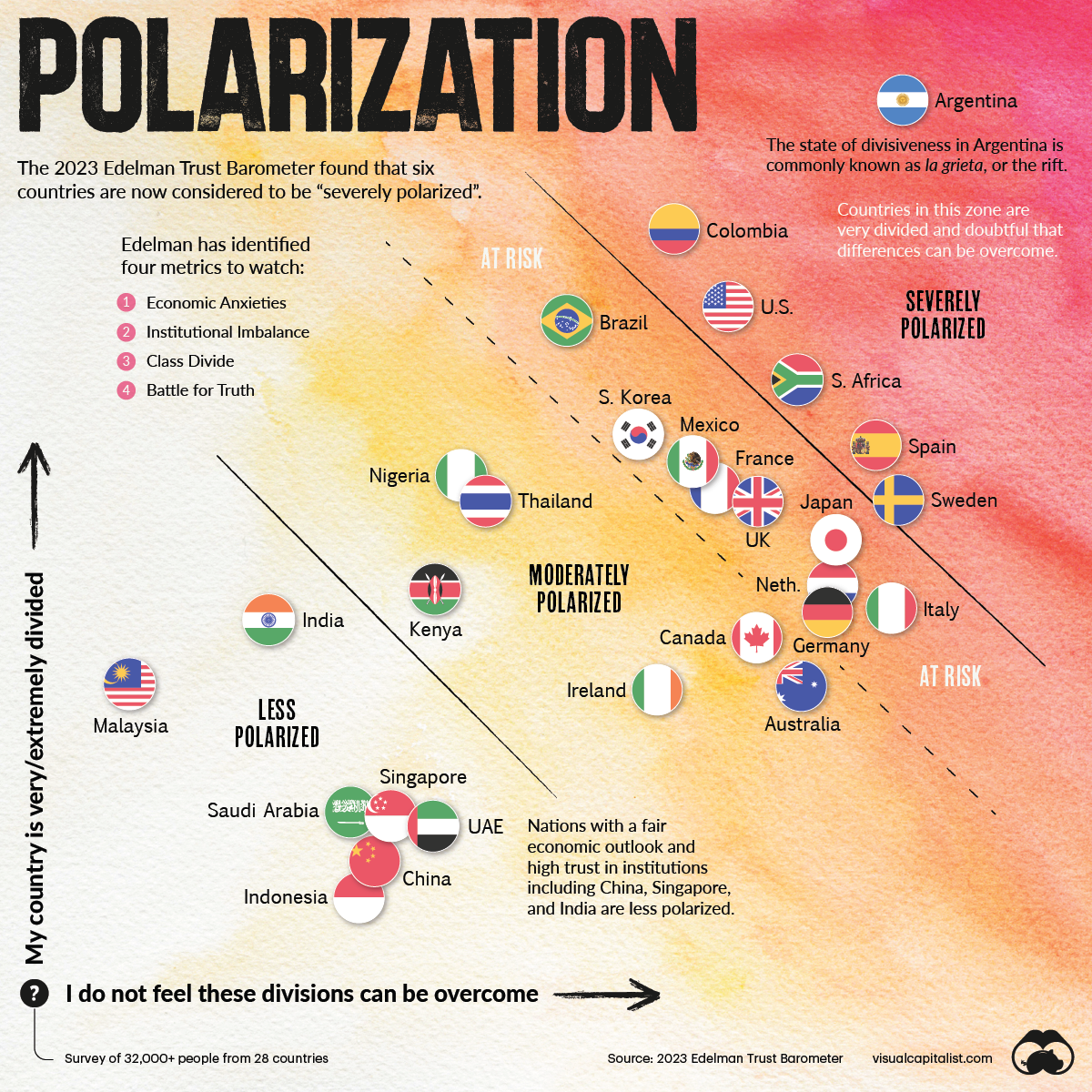 How do you measure something that’s made headlines for half a decade but is still difficult to quantify? We’re talking about polarization.

Even within the social sciences, polarization covers everything from racial segregation, to labor skill levels, to class divide, to political ideology.

How Do You Quantify Polarization?

Edelman’s data on which countries are the most polarized comes from survey results asking respondents two very simple questions:

The questions help bring to light the social issues a particular country is facing and the lack of consensus on those issues.

Plotted against each other, a chart emerges. A country in the top–right corner of the chart is “severely polarized.” Countries located closer to the lower–left are considered less polarized.

In the report, Edelman identifies four metrics to watch for and measure which help quantify polarization.

Following Edelman’s metrics, countries with economic uncertainty and inequality as well as institutional distrust are more likely to be polarized. Below, we look at key highlights from the chart.

Despite being one of the largest economies in Latin America, Argentina is the most polarized country surveyed by a large margin. Foreign loan defaults, a high fiscal deficit, and now surging inflation have created a perfect storm in the country.

43% of the Argentinian respondents said they will be better off in five years, down 17 percentage points from last year.

Along with fiscal upheaval, Argentinians are also dealing with enduring corruption in the public sector and abrupt policy reversals between governments. Only 20% of those surveyed in Argentina said they trusted the government—the least of all surveyed countries.

Here are all six of the countries considered to be severely polarized:

In the U.S., heightened political upheaval between Democrats and Republicans over the last few years has led to strengthening ideological stances and to an abundance of headlines about polarization. Only 42% of respondents in the country trust the government.

And in South Africa, persistent inequality and falling trust in the African National Congress also check off Edelman’s metrics. It’s also second after Argentina with the least trust in government (22%) per the survey.

The biggest cluster of 15 countries are in moderately polarized section of the chart, with all continents represented.

Some are on the cusp of being severely polarized, including economic heavyweights like Japan, the UK, France, and Germany. On the other hand, smaller economies like Thailand, Kenya, and Nigeria, are doing comparatively better on the polarization chart.

Countries with fair economic outlook and high trust in institutions including China, Singapore, and India are in the bottom left sector of the chart.

It’s interesting to note that of the seven countries in that sector, three are not democracies. That said, there are also more developing countries on this list as well, which could also be a factor.

Edelman notes that polarization is both “cause and consequence of distrust,” creating a self-fulfilling cycle. Aside from the four metrics stated above, concerns about the erosion of civility and weakening social fabric also lead to polarization.

As global events unfold in 2023—including looming worries of a recession—it will be fascinating to see how countries might switch positions in the year to come.