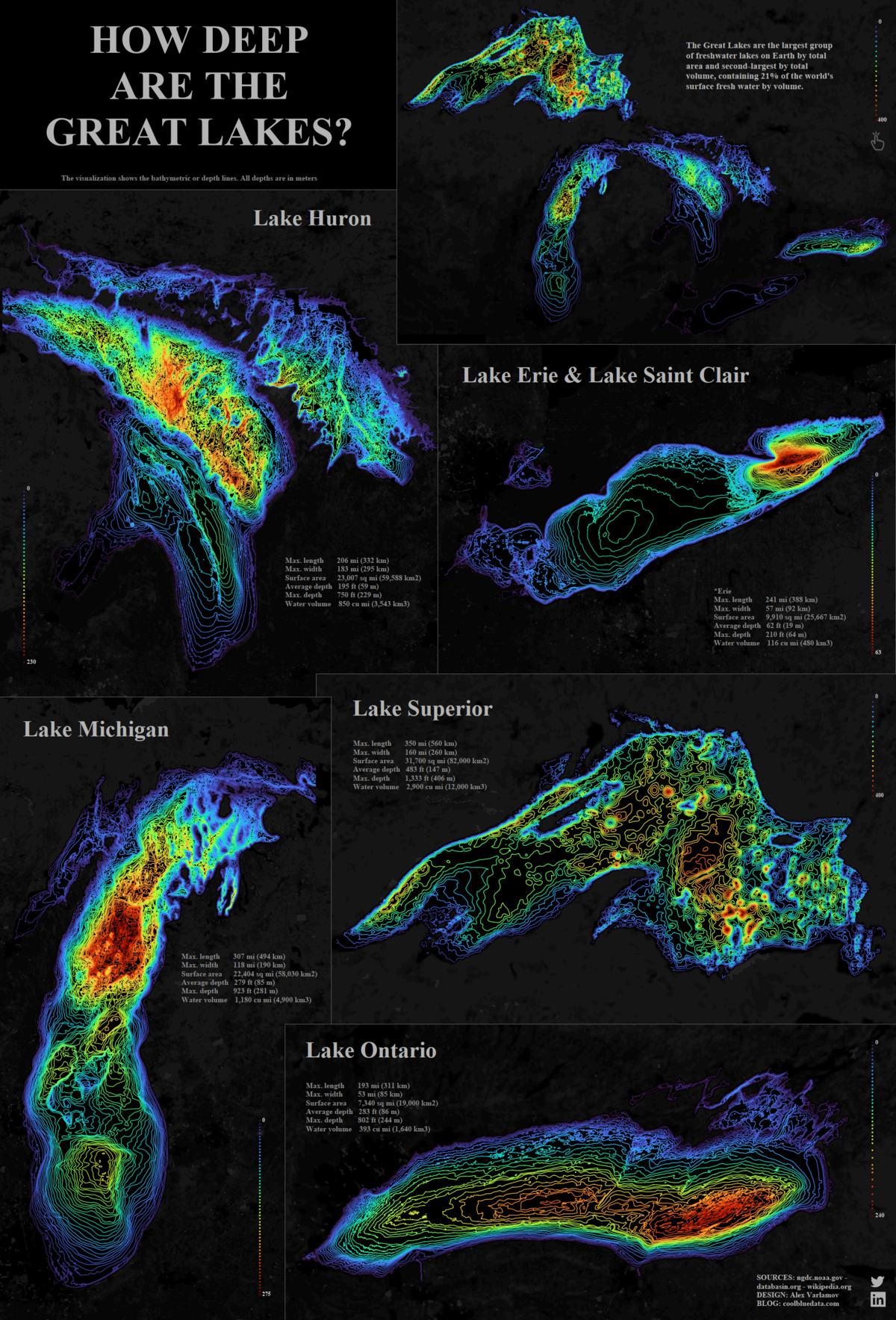 View the full-resolution version of this infographic

Visualized: The Depth of The Great Lakes

Click here to view the interactive version of the visualization on Tableau.

As the seasons change, it’s natural to want to enjoy the outdoors to the fullest. The Great Lakes, a distinct geographical region sandwiched between the U.S. and Canada, provides immense opportunity for millions of tourists to do just that every year.

This bathymetric visualization, created by Alex Varlamov, helps put the sheer size and depth of all five of the Great Lakes into perspective.

Bathymetry is the study of the underwater depth of ocean or lake floors, a geographical science that falls under the wider umbrella of hydrography.

In essence, it is the underwater equivalent of topography. Contour lines help to represent and study the physical features of bodies of water, from oceans to lakes.

Most bathymetric studies are conducted via sonar systems, transmitting pulses that ‘ping’ off the ocean and lake floor, uncovering what lies below.

The Depth of the Great Lakes, Compared

High on the list of the world’s largest lakes, the five Great Lakes altogether account for over 244,700 km² (94,250 mi²) in total surface area. That’s bigger than the entire United Kingdom.

Lake Erie is by far the shallowest of the lakes, with an average depth of just 19 meters (62 ft). That means on average, Lake Superior is about eight times deeper.

With that in mind, one drawback of the visualization is that it doesn’t provide an accurate view of how deep these lakes are in relation to one another.

For that, check out this additional visualization also created by Alex Varlamov, which is scaled to the same 20 meter step—in this view, Lake Erie practically disappears.

More than Meets the Eye

The Great Lakes are not only notable for their form, but also their function—they’re a crucial waterway contributing to the economy of the area, supporting over 50 million jobs and contributing $6 trillion to gross domestic product (GDP).

Together, the five Great Lakes feed into the Atlantic Ocean—and when we expand the scope to compare these lakes to vast oceans, trenches, and drill holes, the depth of the Great Lakes barely scratches the surface.

The post Visualizing the Depth of the Great Lakes appeared first on Visual Capitalist.