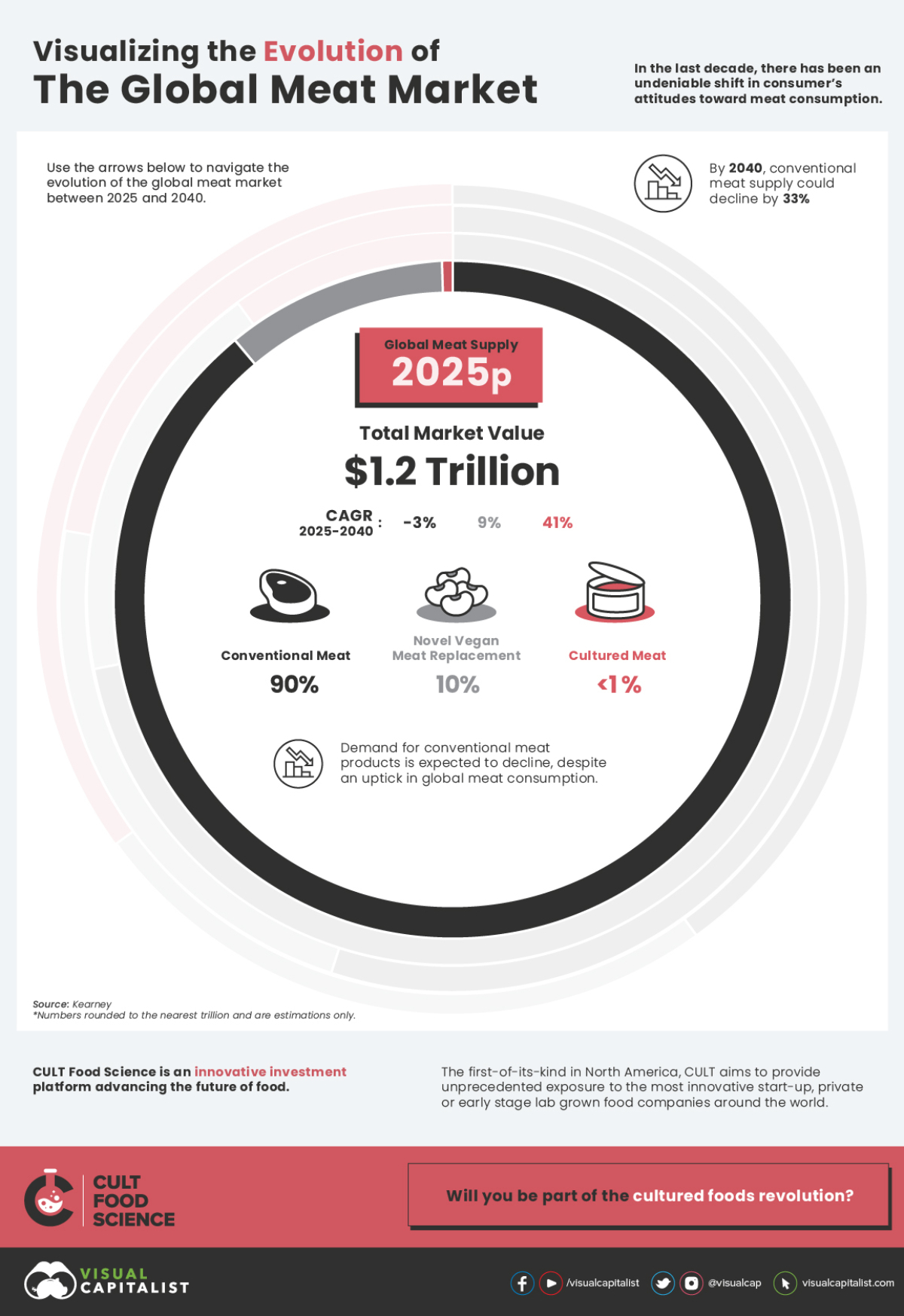 The Evolution of the Global Meat Market

In the last decade, there has been an undeniable shift in consumers’ preferences when it comes to eating meat.

This is partly due to the wide availability of meat replacement options combined with growing awareness of their health benefits and lower impact on the environment compared to conventional meat.

In this infographic from CULT Food Science (CSE: CULT), we examine how meat consumption is expected to evolve over the next two decades. Let’s dive in.

The COVID-19 pandemic triggered a massive turning point for the meat industry, and it will continue to evolve dramatically over the next 20 years. Taking inflation into account, the global meat market is expected to grow overall by roughly 3% by 2040 as a result of population growth.

However, as consumption shifts, conventional meat supply is expected to decline by more than 33% according to Kearney. These products will be replaced by innovative meat alternatives, some of which have yet to hit the mass market.

Aside from new meat replacements, biotech will also transform adjacent industries like dairy, eggs, and fish.

The Future of Food?

Meat replacements and cultured meat could overtake the conventional meat market, with cultured meats reigning supreme overall with a 41% annual growth rate (CAGR) between 2025 and 2040.

New technologies for cultivating non-animal based protein will provide one-third of the global meat supply due to an increase in commercial competitiveness and consumers becoming more accepting of these kinds of products.

Meanwhile, conventional meat will make up just 40% of all global meat supply by 2040, compared to 90% in 2025. For this very reason, conventional meat producers are investing a significant amount of capital in meat alternative companies so they can avoid disruption.

Invest in the Revolution

The changing tides in the industry have sparked a variety of undeniable opportunities:

CULT Food Science (CSE: CULT) is a cutting edge investment platform advancing the future of food. The first-of-its-kind in North America, CULT aims to provide unprecedented exposure to the most innovative start-up, private or early stage lab grown food companies around the world.

Will you be part of the revolution?

The post Visualizing the Evolution of the Global Meat Market appeared first on Visual Capitalist.