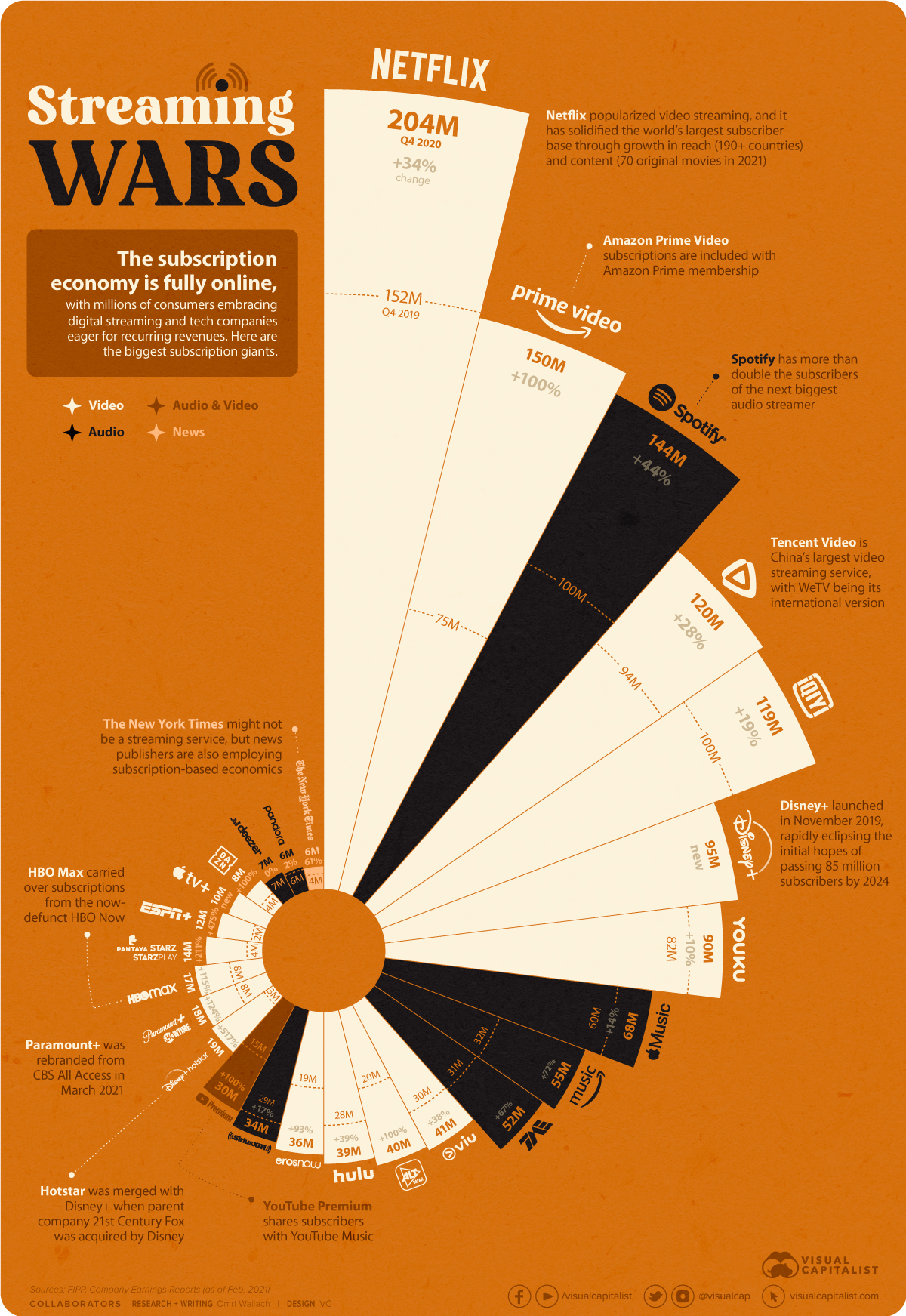 Which Streaming Service Has The Most Subscriptions?

Many companies have launched a streaming service over the past few years, trying to capitalize on the digital media shift and launching the so-called “streaming wars.”

After Netflix grew from a small DVD-rental company to a household name, every media company from Disney to Apple saw recurring revenues ripe for the taking. Likewise, the audio industry has long-since accepted Spotify’s rise to prominence, as streaming has become the de facto method of consumption for many.

But it was actually the unexpected COVID-19 pandemic that solidified the foothold of digital streaming, with subscription services seeing massive growth over the last year. Although it was expected that many new services would flounder along the way, media subscription services saw wide scale growth and adoption almost across the board.

We’ve taken the video, audio, and news subscription services with 5+ million subscribers to see who came out on top—and who has grown the most quickly—over the past year. Data comes from the FIPP media association as well as individual company reports.

The top of the streaming giant pantheon highlights two staples of business: the first-mover advantage and the power of conglomeration.

With 200+ million global subscribers, Netflix has capitalized on its position as the first and primary name in digital video streaming. Though its consumer base in the Americas has begun to plateau, the company’s growth in reach (190+ countries) and content (70+ original movies slated for 2021) has put it more than 50 million subscribers ahead of its closest competition.

Meanwhile, Amazon’s position as the second most popular video streaming service with 150 million subscribers might be surprising. However, Prime Video subscriptions are included with membership to Amazon Prime, which saw massive growth in usage during the pandemic.

Another standout is the number of large streaming services based in Asia. China-based Tencent Video (also known as WeTV) and Baidu’s iQIYI streaming services both crossed 100 million paid subscribers, with Alibaba’s Youku not far behind with 90 million.

But perhaps most notable of all is Disney’s rapid ascension to the upper echelons of streaming service giants.

Despite Disney+ launching in late 2019 with a somewhat lackluster content library (only one original series with one episode at launch), it has quickly rocketed both in terms of content and its subscriber base. With almost 95 million subscribers, it has amassed more subscribers in just over one year than Disney expected it could reach by 2024.

The Disney+ wave also spurred growth in partner streaming services like Hotstar and ESPN+, while other services with smaller subscriber bases saw large growth rates thanks to the COVID-19 pandemic.

The lingering question is how the landscape will look when the pandemic starts to wind down, and when all the new players are accounted for. NBCUniversal’s Peacock, for example, has reached over 30 million subscribers as of January 2021, but the company hasn’t yet disclosed how many are paid subscribers.

Likewise, competitors are investing in content libraries to try and make up ground on Netflix and Disney. HBO Max is slated to start launching internationally in June 2021, and ViacomCBS rebranded and expanded CBS All Access into Paramount+.

And international growth is vital. Three of the top six video streaming services by subscribers are based in China, while Indian services Hotstar, ALTBalaji, and Eros Now all saw surges in subscriber bases, with more room left to grow.

The post Which Streaming Service Has the Most Subscriptions? appeared first on Visual Capitalist.