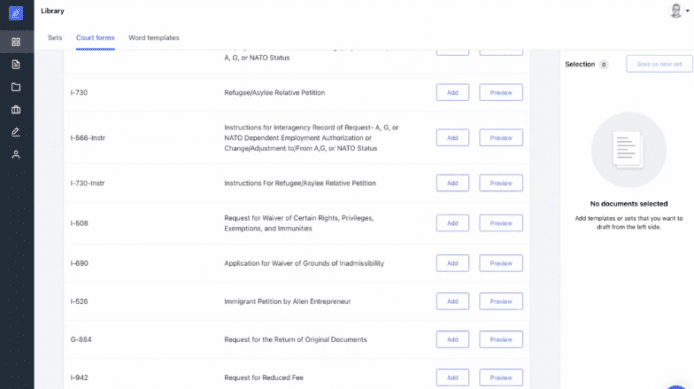 Lawyaw has known for a long time that attorneys like to use templates, but, generally, don’t have the capacity to maintain them. For years, they have been offering ready-made state and federal court forms in California, as well as immigration templates throughout the country. They’ve earned a reputation for keeping these up to date and making them simple to use.

This fastidiousness takes a lot of effort—and resources. And, until recently, California was the only state built out well enough to offer it to the public.

Since the Clio acquisition, Lawyaw now boasts ready-made forms in California, New York, Florida, Texas, Georgia, and Illinois. And they appear to have plans to continue this trend throughout the United States. As they keep these documents up-to-date on their end, this is a huge boon to any attorney practicing in these jurisdictions.

Lawyaw, as a document automation platform, allows users to fill-out forms in two different ways. First, they have the ready-made court forms. And second, users can create their own custom templates so they can make forms out of their own documents.

Previously, these functions were siloed from each other, so users could not take advantage of both types of documents in one session (i.e. data input into a ready-made form would not be able to fill out a custom template at the same time). With new users, however, this is remedied. The new interface allows users to manipulate court forms at the same time as custom templates. Even adding them to the same template set so they can be automated together.

Take a look at the video below to see more about the new and improved Lawyaw platform.

How to Get It

To learn more about Lawyaw, take a look at our full review. Or, you can sign-up for a free demo at lawyaw.com.