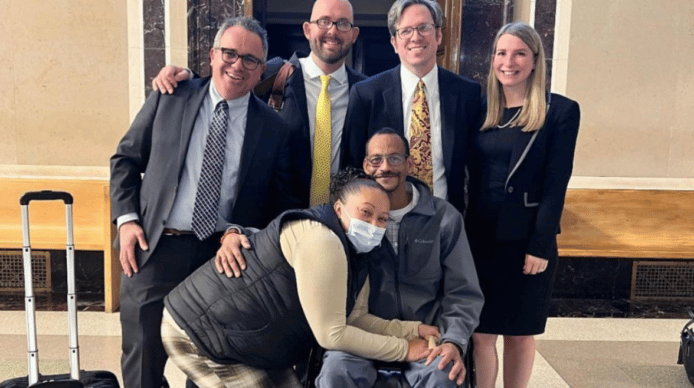 Five years ago, attorney Ryan McKeen, heard Mikey Cruz’s story for the first time. How a guy gets up and goes to the plant where he has worked for the last fifteen years. Then how, in an instant, his whole life shattered.

Unsecured Philips light bulbs, weighing 1,300 pounds, fell on Cruz from twenty feet in the air. His injuries were extensive, and the doctors told Cruz there was a 95% chance he’d never walk again. Ryan knew it was an important case. He also knew his small firm would need the resources to support it.

Five years ago, Connecticut Trial Firm, LLC was a team of two lawyers and an assistant who worked nine hours per week. A case like Cruz’s would not be easy or cheap. Ryan knew he’d need to build a firm to support the case.

“It’s easy for lawyers to hear a $100 million verdict and want to jump into the contingency fee business,” said Ryan. “It appears to be ‘easy money’. Nothing is further from the truth.”

It became apparent early on that the four defendants in the case would not settle quickly or easily. The defendants would spend five years vigorously defending the case. In those years, there were over forty depositions, ten experts, and thousands of documents exchanged. As the trial date loomed closer, the defendants filed hundreds of motions.

Ryan and his law partner, Andrew Garza, knew they would need to invest tremendous time and resources to prosecute the case. And take it to trial if necessary. They also realized that making such a bet could bankrupt their law firm if they weren’t careful.

“You have to play all in,” said Ryan. “You have to do the work, understand the risks, mitigate those risks, and put all of your chips on the table.”

Ryan and Andrew accepted Cruz’s case. But they knew they needed to build a business that could sustain them. They knew the firm had to give them the necessary resources to fight for Cruz.

Ryan and Andrew intentionally built Connecticut Trial Firm to provide better client services than what they heard other PI firms did. They designed every part of the client’s experience—from the first phone call to how they closed their cases—with the client in mind. They even hired a Client Happiness Coordinator to ensure every client felt cared for throughout the entire representation. While other firms invested thousands of dollars in marketing, Ryan and Andrew invested in their team and their client’s experience.

Their work paid off. They found client referrals were their best source of new business. And they quickly found more and more potential clients calling to hire them. They continued to grow their team to keep up with their growing caseload. Today, the Connecticut Trial Firm has a team of 29 people.

The firm’s exponential growth allowed them to have the cash and attorney time to invest in Cruz’s case. In fact, for the last ten months, Andrew has worked almost exclusively on Cruz’s case. That amount of attention would have been impossible if the firm still had two attorneys.

They made space for what was really important.

The Firm’s Investment Paid Off

On Wednesday, October 5, 2022, Ryan and Andrew sat at the counsel’s table with Cruz and his wife and heard the words “$100 million.” It was the highest verdict in state history.

Ryan sobbed. It was the result of five years of not just hard work but many sleepless nights worrying about his clients. It was five years of fretting about his business and agonizing if the jury would appreciate the severity of the situation. Five years of brooding on the hundreds of other unknowns that pop up and make business owners question everything.

“In the end, justice was served,” said Ryan. “It was the greatest honor of my career to have stood next to our clients and said ‘Ryan McKeen for the plaintiffs, Mikey and Emily Cruz’.”

Beyond showing Ryan and Andrew’s legal prowess, the verdict is a testament to their business skills. They successfully built Connecticut Trial Firm to litigate the case to a jury verdict. And through appeals and collections, if necessary. It isn’t easy money. Years of managing an extensive pipeline of cases and strategically building their business led to this amazing result.

Ryan started his firm with $2,500. He had a previously failed partnership and years when his taxable income was negative. One morning, while watching his wife cry after learning they had $50,000 in credit card debt, everything changed. That was the moment Ryan decided to go from being a solo to operating Connecticut Trial Firm as a business.

“I love being able to share what I learned along the way with other attorneys who are just starting or still building their practices,” said Ryan. “I have benefited from the sage advice of mentors and colleagues. But I also invested in paid business coaching at different stages of my business. My coaches have helped me prioritize, define my strategy, and have kept me accountable. I’ve had 20-minute coaching sessions that have unlocked six-figure changes in my business.”

If you are interested in learning more about Ryan’s coaching or Lawyerist Lab, tell us a little more about your business, and we’ll connect for a quick call to see if Lab is right for your firm.