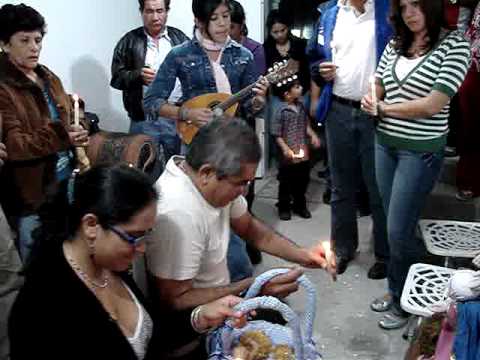 “Paradura del Niño” in the Venezuelan Andes – Article of the series:

This tradition is very beautiful and is celebrated in the company of the family, neighbors and friends.The “Paradura del Niño” in the Venezuelan Andes consists of worship of the child Jesus with chants and carols. It is also customary to pray the holy rosary and burn fireworks, the latter has been introduced in recent years.

The ” Paradura del Niño” represents the moment when the baby Jesus gets up and walks.

It is worth noting that on many occasions the child Jesus is given a beautiful serenade in the parade.

Usually, this tradition takes place in the states Táchira, Mérida and Trujillo.

Origin of Tradition: Paradura del Niño in the Venezuelan Andes

The different scholars who have taken care of the origin of this tradition coincide in that it was a legacy of the Spanish.

It was in this period that Catholicism and the tradition of St. Francis of Assisi were imposed. Indeed, to symbolize the arrival of the son of God to the earth.

It is worth noting that it was the Spaniards who left this mark in the Andean region. This thanks to religion and its cultural traditions.

The idea of doing the ” Paradura del Niño” in the Venezuelan Andes is to begin the year of the hand of Jesus the son of God.

Many catholic churches of the Venezuelan Andes, set as a date for this festivity on February 2. Therefore, it coincides with the day of the virgin of the Candelaria.

A beautiful tradition: the “Paradura del Niño” in the Venezuelan Andes

The population of the Andean states such as Táchira, Mérida and Trujillo are of fervent Catholic faith. Therefore, a series of traditions are celebrated throughout the year, beginning with the Paradura del Niño.

It is worth noting that the traditions of Easter are also deeply rooted in the Andean population.

The Paradura del Niño in the Venezuelan Andes begins to celebrate after 25 December. But most common is that the majority celebrate them after January 1.

The tradition of the Paradise of the child Jesus, are made songs, prayers, rosaries. Also present are promises, sweets and fireworks.

The state where this tradition mostly prevails is in the state of Mérida.

Its celebration will depend on the state where it is held, because although it is common in the Andes region, in some places are usually with other variants.

Usually in the towns of the South and the Paramo Area this celebration is held on a high level. In this festivity, the presence of people singing to the rhythm of the violin, charras, four and the “bandola” is usually seen.

Singing to the Bany Jesus and the Choice of the Godparents

When guests meet, four godfathers are chosen. These people wear a white tissue where they walk the child Jesus.

One of the verses mentioned in this procession is

The Andeans usually meet this habit with great faith in thanksgiving the Creator.

During the chants, the godparents and the crowd make the route with the image of the Child Jesus on the streets near the house.

There they accompany songs in honor of the child, until they reach the mangebre again.

Afterwards the holy Rosary is made, and the image rises –of the child Jesus- indicating that it is already on the stood-up. Then the present give a kiss to the image as a sign of worship and give a monetary contribution.

In some cases, people choose to make prayers sung. That’s why the prayers will be tuned to the rhythm of the four, violin and maracas

It is worth noting that this is an ancient tradition that continues to be carried out every year. Therefore, it goes from generation to generation maintaining the original essence that is the worship of the God Child.

The Robbery of the child Jesus, a mischievous tradition

This gracious tradition, is represented with the “robbery of the child Jesus” one of the people who attend steals the child Jesus. Then the person is discovered.

Later, the godparents are sought to perform the songs and prayer of the Holy Rosary.

He is also walking with the attendees who sing in the Paraduras. It is often that the verses of the songs vary.

At the end of the worship activity of the God Child is made the delivery of candy, cake. In addition, in some places give to the present cream punch, and food.

Gustavo Mirabal Castro along with his wife Carolina Chapellín and children enjoyed these celebrations when they traveled to the Andean region.

The “Paradura del Niño”, a tradition of the Venezuelan Andes

the “Paradura del Niño” in the Venezuelan Andes is a beautiful tradition that is celebrated with a lot of faith.Venezuela is characterized by many traditions, but in the Andean region one of the most highlight is this festivity.

So much importance is given to the Child’s Paradox that even educational institutions take place. That is why the institutions that go from kindergarten to universities celebrate it.

Gustavo Mirabal Castro is a man with a fervent Catholic faith who has enjoyed participating in this beautiful worship of the child God.