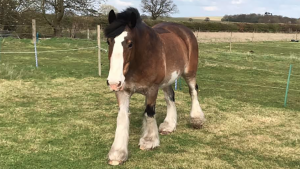 I am here, living to fight another day peoples, and quite frankly, at the moment, that’s something of a miracle. No, I don’t mean because of the human strangles epidemic, which is now on day 73 billion and 21, but more because I am increasingly convinced my mother has a death wish.

Last week I conveyed to you all how ungrateful she was for my life-saving heroics out hacking with Bob and how, frankly, I despaired at her lunacy at being tense riding past a large, water spurting irrigator, which was innocently doing its job, and yet does not see the inherent dangers of twigs. Which we all know are very dangerous and prone to jumping up and smacking a boy in his man sausage area when he least expects it.

That was last week. This week was even worse. I am honestly concerned for her; it’s like watching a Richard Attenborough programme on Darwinism in action — and let’s face it, if we’re going on “survival of the fittest” then she’s got not a snowball’s chance in a microwave of being the last woman standing…

Sunday morning had been and gone with no sign of the mothership, so foolishly I had relaxed and allowed the boss lady to bring me inside out of the pouring rain, such that I could enjoy my breakfast without it being diluted by the equivalent of Niagara running down my nose. I had enjoyed a sedate day — haynet and chill baby — and was thus faintly amused when mini-mother showed up and Barbie Boy was made to go and get his barnet bedraggled out in the school in the drizzle. He clearly objected to being wet, as next thing I know he was being extensively lunged before mini-mother got back onboard, so I looked forward to his stint in the dog house while I snuggled up to my dinner bringer and laughed.

Perplexingly, however, he was brought in, dried, dressed and taken out to the fields, along with his food, while I was left in the stables. At this point, I suppose with hindsight, it was clear that my large, depressed human lemming had other ideas, and sure enough, shortly afterwards, Bob and his mother arrived and not-slim-and-slightly-dim started tacking me up. Now it’s also fair to say my mood had deflated faster than a blow-up doll on a cactus ranch, so I wasn’t as cooperative as I perhaps could have been. For which meant I jiffled about like potty trained toddler needing the loo, and mother did a lot of muttering under her breath about unhelpful horses holding their breath.

Anyway, eventually she got me tacked up, we mounted (following the usual social distancing protocols with the mounting block, which frankly is never going to get old), and off we went.

In my defence it was raining slightly, windy, I should have been having my dinner and the day had a “Y” in it. So thus, I was a little “spritely” — mother used other words but they really weren’t very polite and I’m not sure I should repeat them. By the time we reached the road across the fields, I had counted over nine times that I had saved us from certain death, while mother tried (and failed) to use the fact I’m stone blind now in my right eye as some sort of cunning way to ensure I didn’t see the dangers as they approached. She forgets, however, I am Hoverine and thus can use my other senses as well as my million dollar left eye…

On arriving at the edge of the road, we were greeted by a very, very large and rattly artic lorry, and for a brief moment I did consider sacrificing Bob to the God of Haulage and hauling my ass back home, but mother had a soothing hand on my neck and a rock solid right leg, thus preventing my Nureyev impression before I had even had the thought travel down my synapses to my feet. She is occasionally more cunning than a fox that used to be Professor of Cunning at Oxford University, but has moved on and is now working for the U.N. at the High Commission of International Cunning Planning. Only occasionally mind you, as we were about to discover (this really calls for a dun, dun, dun moment and not a yellow pony type).

As we stepped out onto the road (note I say stepped, and not as mother described it “crabbed”, out onto the road sideways), I became aware of a movement in the force. Or more accurately and less dramatically I realised my saddle was slipping. Now, again in my defence, despite being very gifted (I have after all penned six books), I can’t actually speak human, so thus trying to convey to galloping gormless up top that she was slithering round my barrel like J Lo on a pole (only no one on God’s green earth would want to watch it — mother that is), was only possible through interpretive dance.

What I can hoof on heart, tell you dearest diary, is the woman is a Philistine.

I tried every move I knew, the sashay sideways, the reverse at high speed backwards down a small ditch and into a tree, the “use Bob as a hoof puppet” and even the patented “I’m not scared of cars, so why am I trying to throw you under the wheels of a Land Rover you dumb-assed woman”, but still she didn’t get it.

A lot of it. Mainly of the schooling whip down my butt variety as mother valiantly tried to ensure that the unfortunate driver the Land Rover suffered no more damage than the need for clean pants and possibly a light sponge down of his seat upholstery…

By the time the ashen-faced driver had managed to extricate himself from our impromptu flash mob dance, mother had indeed realised that a) the saddle had now slipped so far it was beyond recovery, b) that underneath her sizeable padding there actually lurks some pretty good core muscles, and c) getting your leg over in that scenario is easier said than done. Bob’s mum had jumped off to assist, and with a herculean effort mother threw herself off me like Frankie Dettori’s much older and fatter sibling. It was like watching Mr Blobby base jump…

We regrouped in the field gateway with mother sorting out the fine mess she’d gotten us into and actually fitting my tack on like someone who vaguely knows what they’re doing. Which was all fine and dandy until both her and Bobs mother realised that a) we are both a fair size and b) they’re both old and broken so thus they had about as much chance of ground mounting as a giraffe winning a limbo competition.

What then followed was a Laurel and Hardy style wander through the woods as we tried to find logs, gates or a small crane to allow them both back into the saddle to no avail. We ended up walking back around the long way, with Bob and I quite happily bumbling along with our respective motherships doing the equine equivalent of the walk of shame. Since mother has clearly ditched the grazing muzzle, then to be honest she needed the step count — yet again she should be thanking me. Laminitis isn’t funny.

Fair to say she didn’t find the situation in the slightest bit amusing and thus I was unceremoniously returned to my field with an atmosphere so chilly I had to check my man parts for frostbite. It’s definitely fair to say mother wasn’t going to “let it go” anytime soon.

We continue to publish Horse & Hound magazine weekly during the coronavirus pandemic, as well as keeping horseandhound.co.uk up to date with all the breaking news, features and more. Click here for info about magazine subscriptions (six issues for £6) and access to our premium H&H Plus content online.