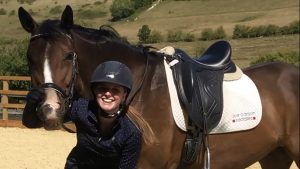 Firstly, I want to say a huge thank you to all you lovely people who got in touch after my last blog about Dolce. I was so moved by everyone’s messages and feel amazed that so many could relate to my story.

Several people suggested getting professional help in the brain department. Originally, I didn’t want to go down that route as I didn’t want to tell you all that there is some magical cure to fix confidence issues, as financially that kind of help isn’t assesible to all. However, I was approached by Jackie McCormick who works with solution-focused hypnotherapy and let me tell you — I LOVE being hypnotised! Jackie is wonderful and after just a few Zoom calls, she has boosted my overall mood dramactically. Sometimes the bravest thing is actually admitting that you do need help — and I’m excited to see where I can now get to with the support of Jackie.

They say good things come to those who wait, and having had Simba for 18 months we have been playing a long waiting game to get him to his first show. Brought from Germany as a very babyish rising six-year-old, we have been prevented from taking him out, first by his fractured molar tooth, then by my own injury. I was in the process of entering him for his first show for the end of March this year, but obviously that didn’t happen either! Now in September, we were free, fit and raring to go (see my video below of him on the lunge to get a sense of just how raring to go he is!).

I don’t think I have ever mentioned his official name — Sol Invictus. It means ‘unconquered sun’ and was the later Roman God of the sun. Call me sentimental, but I achived so many dreams with my Greek God of the sun, Apollo, with whom I competed up to grand prix level… now it is time for the Roman empire to take over.

He is seven now, which might make some people might gasp in horror that he is only just starting his competition career, but age is just a number. His is totally born wild, and I don’t really mind if he stays like that forever (aged 18, Apollo has never grown up either and still has a twinkle of foolish youth in his eyes). 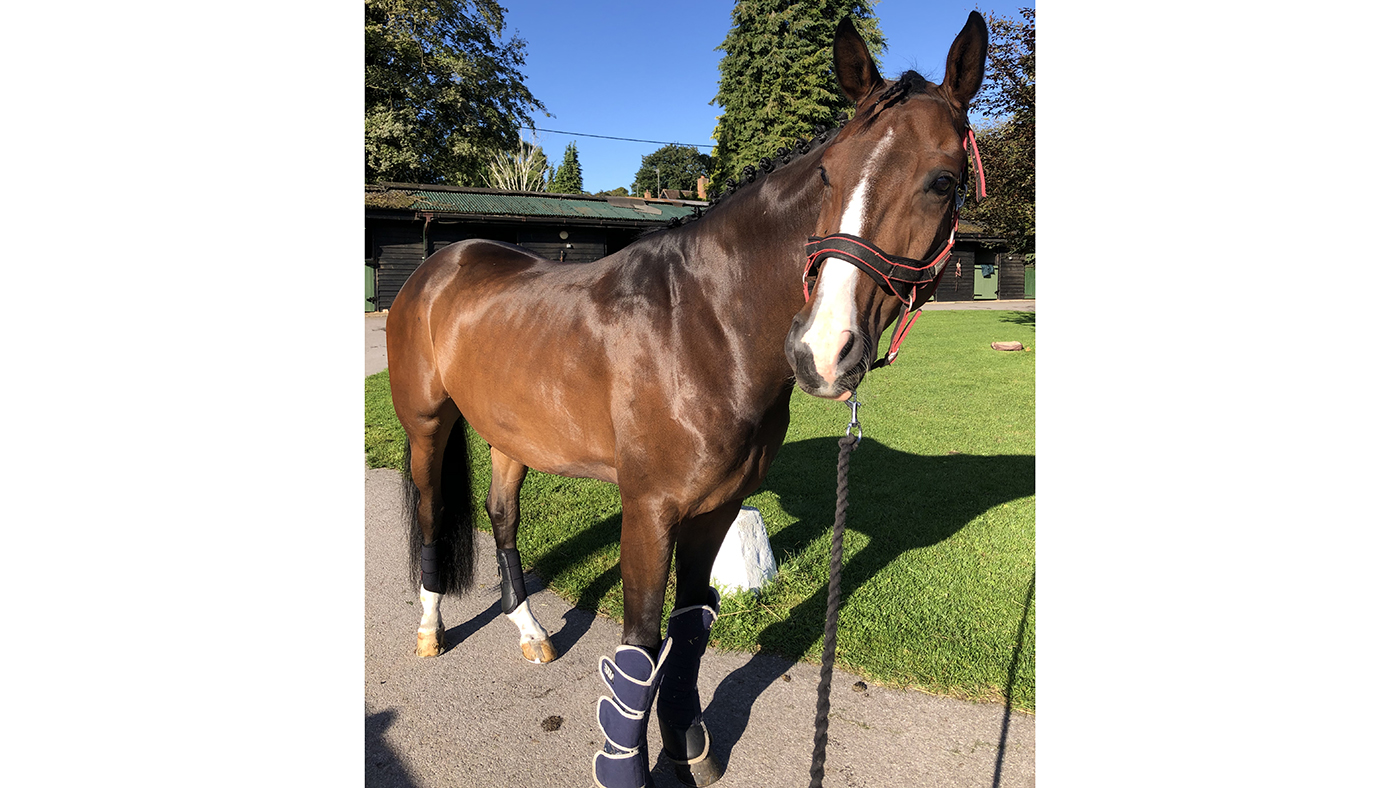 Thanks to his regular trips to the water treadmill at New Hatches, he travels like a dream. We entered him for two novice tests at local venue, Windmill Farm, in the hope of having an easy first voyage. By keeping our sea analogy afloat, there was a mini tsunami at the start of our sail. But as they say, easy waters don’t make a skilled sailor!

Upon first getting on and entering the warm-up arena, I realised I was sat not on a horse, but a bomb ready for explosion, so I made a swift, tactical dismount. This is an extremely useful movement and maybe should be used in future dressage tests — I at least would get a 10. After a hand walk around, the inner dragon in Simba stopped breathing fire and I got back on. We went in for the first test staring wide-eyed at the white boards, banners and reflected judges’ hut. I have to thank the wonderful judge, who could tell I was on an inexperienced horse and let me go around the arena three times before ringing the bell, making the whole experience easier for us. Riding that test was like riding a giraffe on jelly stilts — neither Simba or I was in control — we just hoped and prayed. But bless him, he was completely well-behaved, just totally baby-like. Two breaks into trot from canter, not using any straight lines and dodgy circles left us with a 67.5%. This did leave me feeling pretty deflated as I felt I had let him down. 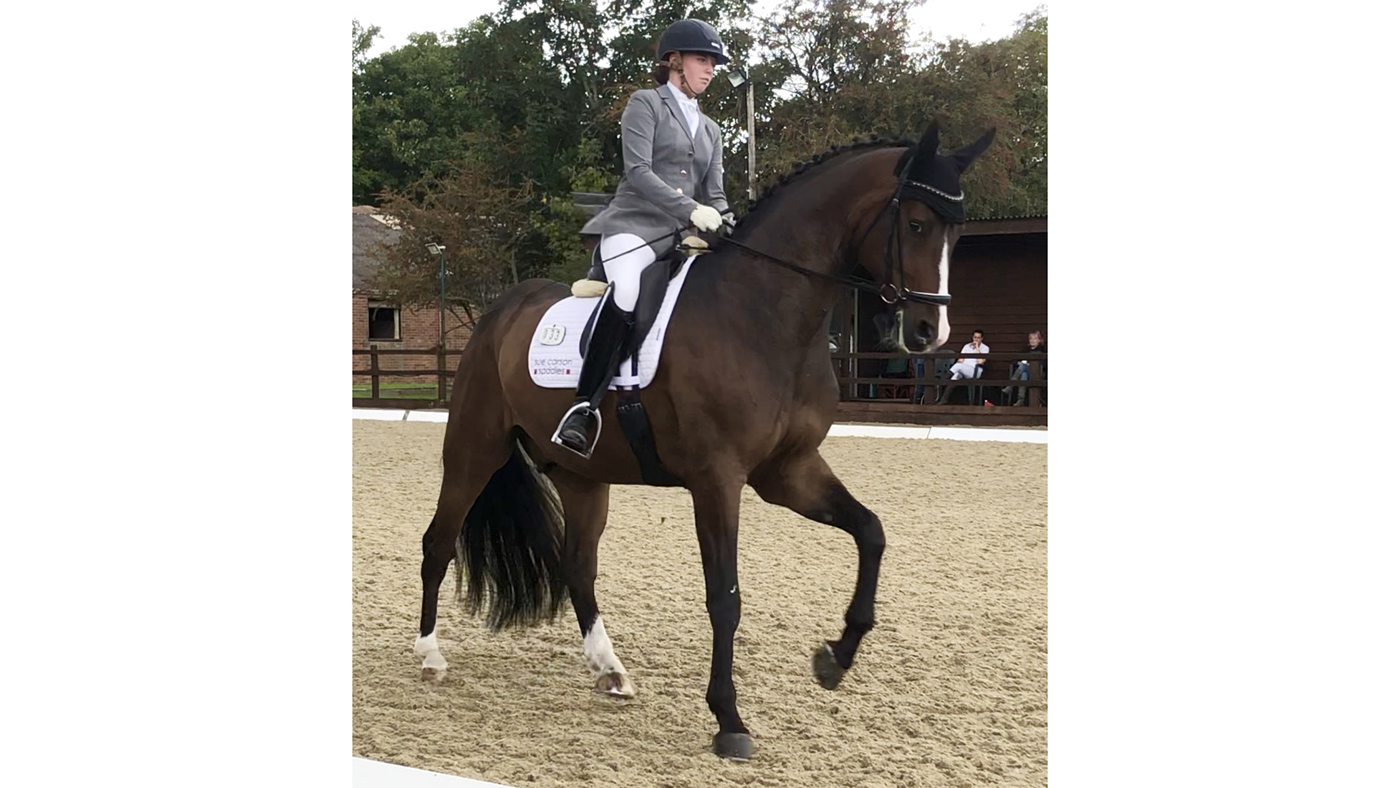 Simba in the ring

When I got back on for the second test, I could feel he was much more zen. We had a little trot, but mainly spent the 15 minutes just walking, with me contemplating the pros and cons of picking the blackberries growing by the arena fence (pros: nutritious and delicious. Cons: white gloves and white jods — no way to hide the evidence when I inevitably made a mess). I think it is important to remember when in the warm-up of a show is that you can’t change what you are sat on. You can get them more off the aids and into the contact and frame you want, but you can’t train them or produce them into something better. That work should be done at home prior to the show. I knew the only thing I would achieve by working him more would be tiring him out. Sometimes you have to go ‘okay, this is what it is and lets enjoy it.’ 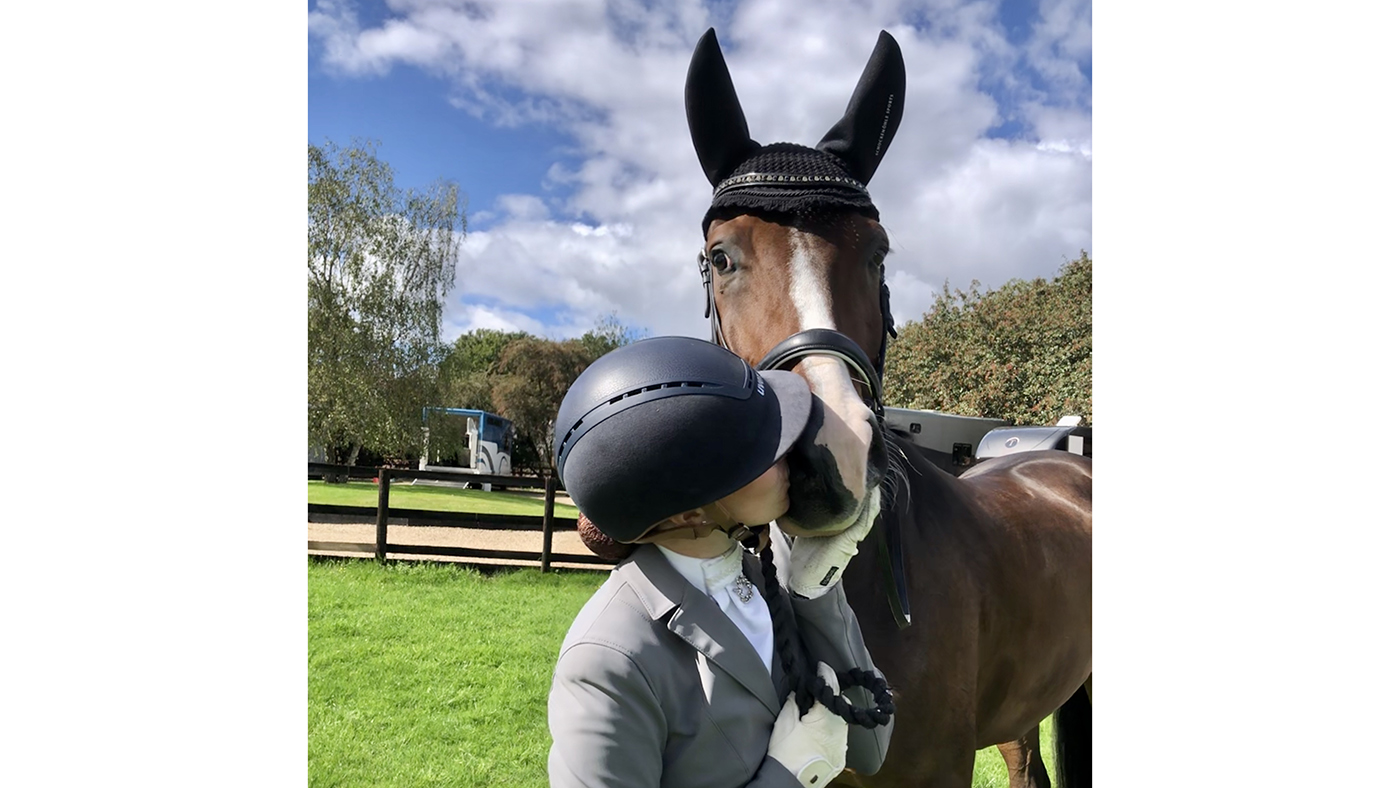 Which is exactly what we did! He still went in like a giraffe, but this time he let me show him the way. I had learnt the test so that my singular other attendee (mum) could film it for his owner. On a side note, it was very sad not to be able to have Simba’s wonderful owner, Susan, there due to Covid restrictions. Of course, these protective measures are there to keep us safe, but it still makes it a rather sombre affair not to have my usual support team with me.

Anyway, I had learnt the test. Easy, I thought, I can recite the grand prix test in my sleep, so how hard can it be to learn a novice? Apparently very hard, as I had learnt novice 37, not novice 37A. The difference? 37A doesn’t have a rein-back. Whoever wrote that and decided that was a good idea, it does nothing but confuse simple-minded people like myself. After a very obiedent rein back at C, the judge popped her head out and said ‘there is no rein back!’ I was utterly confused but carried on. He felt smooth as butter and while still shy, we both really enjoyed it. And we also really enjoyed the 75% awarded to us, even with my -2 marks for ‘going wrong’! Simply by being more relaxed and happier, we improved our score by 8% from the first test. He is a truly extordinary horse and I am very thankful to get to work with him, challenges and all.

So that’s our first show done! He left a boy and came back a man. It was great to get back out again, so now I am off to go enter him for some more classes before winter hits!

That’s all from me for now.