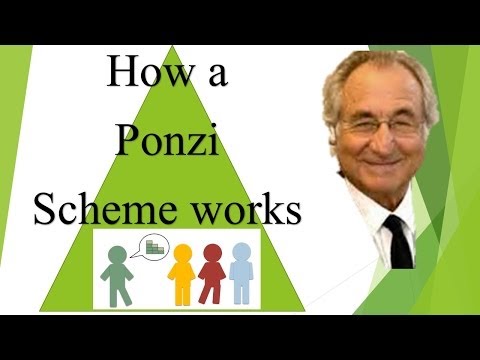 In the world of finance, we find very honest people and schemes that allow high returns. However, we also get opportunists, who based on deceptive offers are made from other people’s money. This is the case of Carlo Ponzi and the pyramid scheme. This scheme is named after him because he was the one who popularized this type of scam.

Today we will know where Carlo Ponzi got the idea of the pyramid scheme, the famous scammers who used this scheme and how to recognize it so as not to be scammed. Our intention is that you can be prepared to avoid falling into the trap of scammers. Without further ado, let’s discover what Carlo Ponzi put in motion with the pyramid scheme.

Who is Carlo Ponzi and what is the pyramid scheme?

Carlos Ponzi was a well-known swindler born in Italy. During his criminal career he had several aliases to avoid being identified. While Carlo Ponzi didn’t invent the pyramid scheme, he was the person who made it so famous that it ended up bearing his name.

The beginnings of Carlo Ponzi

He was born in March 1882 in the municipality of Lugo, located in the province of Ravenna, northern Italy. He was born into a middle-class family.

There are several versions of the beginnings of Carlo Ponzi. For some writers, Carlo Ponzi was always a thief looking for how to take money away from people. For others, Carlo started a brilliant student full of ambitions with a desire to prosper, who in the absence of opportunities became a scammer. No doubt it does not matter what version you decide to accept, the truth is that Carlo Ponzi started his criminal activities very early.

Thanks to the efforts of his father, who worked as a postman, he studied at the University of Rome. There he surrounded himself with the wealthiest class in the country, taking pleasure in the life of a millionaire. However, while living the life of a millionaire, Ponzi did not complete his studies, which led him to consider looking for new horizons.

In 1903 he decided to emigrate to the American continent, specifically to the United States, the land of the possible. His family gave him $200, which was spent entirely on the way to America. We must consider that $200 from 1903 is equivalent to $6233 today. Carlo spent a small fortune on luxuries on his way to the U.S.  This left him broke for opportunities in the United States. There he learned the language and worked as a waiter and painting posters. Despite this, his “allergy” to work made him look for new horizons.

Carlo Ponzi learns what it takes to implement the pyramid scheme

In 1907 he emigrated again to Montreal in Canada. There he got a job at a bank owned by Italian immigrants, the Zarossi Bank. The bank paid 6 percent interest, double what competing banks paid in interest. This made him famous and many people deposited their money there. The truth is that Banco Zarosi was in trouble, and paid the interest of its customers thanks to the deposits of new customers. Undoubtedly, Ponzi’s experience at Zarossi Bank was an inspiration for his scheme.

Banco Zarossi went bankrupt thanks to its bad investments and the scheme of its owners. Meanwhile Ponzi supported the Italian Banker’s family and lived in their home for a short period of time, albeit without money. This led him to look for a former client of the bank from whom he stole a check and forged the signature, defrauding $ 423.58. The amount of money swindled by Ponzi, thanks to inflation, today would represent almost $12,000. That is why it is important to understand “the impact of inflation on finances”.

His extravagant expenses led to his discovery and imprisonment. While in prison he convinced his family that he was not a prisoner but was the administrator of the prison. This behavior is a sign of their ability to lie and scam.

When he left prison Carlo Ponzi needed new airs to mark what would be his new “venture”.

How did Carlo Ponzi become the “creator” of the pyramid system?

Carlo Ponzi was not the creator of the pyramid scheme, as we will see later. We know that his experience at Zarossi Bank inspired Ponzi to establish his scheme. But there were already precedents in this type of scam. We can even find the description of this type of scheme in some novels by Charles Dickens.

But let’s come to understand what the pyramid scheme means and what Carlo Ponzi’s “inspirations” have been.

What is the pyramid scheme?

A pyramid scheme is a scam mechanism that offers huge benefits to investors, which are not sustainable over time. So how to maintain a pyramid scheme. The Ponzi scheme is maintained thanks to the “new investors”.

Some of the keys to this type of scheme is that they start by paying their first investors very well and that they also promise higher interest if the money is “frozen” for long periods of time. They also tend to benefit those who bring in new “investors.”

Behind Ponzi schemes there are usually legitimate businesses, but in no case could they give the promised benefits. What they do is pay the interest of the first investors with the money of the second, and the second investors with the money of those who come in third place … Since not all people withdraw their money, “investors” are simply given balance sheets that reflect their money and profits, which do not exist.

This causes there to be a “snowball” effect that runs out of the scheme. When liquidity problems begin, a rapid and irreversible debacle begins.

In future installments we will talk about ponzi scheme inspirations and scammers famous for using it. Thanks to Gustavo Mirabal, We will also discover how to avoid falling into pyramid schemes.

If you want to know more about personal finance and tips to succeed in them, follow the media of Gustavo Mirabal Castro.