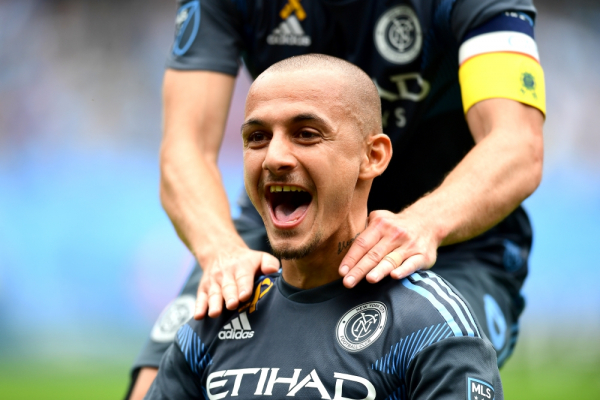 According to the New York Times, a proposed new 25,000-capacity arena is part of a US$1 billion development project in the Bronx, which also includes affordable housing, a hotel, retail stores and a school. The stadium is apparently set to be built on the original Yankee Stadium site.

NYCFC currently play their home games at the new Yankee Stadium, where Major League Baseball’s (MLB) New York Yankees – who have a 20 per cent stake in the MLS outfit – are the primary occupant.

Construction on the new development, according to the report, is not due to begin until 2022 at the earliest with the team finally moving in before the 2024 campaign.

In a statement on NYCFC’s website, Sims said: ‘Though nothing has been finalised, there has been significant progress made, thanks to the hard work and dedication of our partners on this exciting project.

‘We are actively involved with [housing developer] MADDD Equities, the Yankees, NYC Economic Development Corporation, the Bronx Parking Authority, and numerous Bronx community groups and local leaders to bring a transformative project proposal to the South Bronx, one piece of which would be a soccer-specific stadium.

‘In the coming months, we will take further steps to formalise our participation in the public approval process which will include engaging in meaningful public dialogue with community residents, civic leaders, supporters, and local elected officials to obtain critical feedback on the details of this proposal so that we can ensure the project meets the needs of the community and New York City as a whole.’

New York City FC moved into Yankee Stadium when entering MLS in 2015, but have been forced to move important fixtures to other venues in recent years in order to facilitate the Yankees.

The 2020 MLS season kicks off on 29th February, with New York City taking on Columbus Crew in their opening fixture on 1st March.